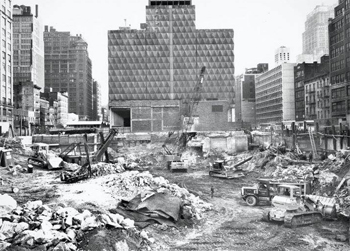 “What we need is an MIT for the fashion industries”
—Mortimer C. Ritter

In the 1940s, fashion and apparel industry members were faced with a dwindling number of qualified people to help them run and carry on their businesses. The next generation wanted to be doctors and lawyers—not tailors. A group of industry members, led by Mortimer C. Ritter, an educator with an interest in programs for young working people, and Max Meyer, a retired menswear manufacturer, set about organizing a school to ensure the vitality of their businesses.

First, they created the Educational Foundation for the Apparel Industries to promote education for the industry. The Foundation then obtained a charter from the New York State Board of Regents to establish a “fashion institute of technology and design.” The institute opened in 1944 with 100 students, and was located on the top two floors of the High School of Needle Trades.

Soon, supporters wanted to bring greater prestige to the industry by having the institute become a college with the authority to confer degrees. Industrialists and educators decided on two majors: Design (with programs in apparel, millinery, and textiles) and Scientific Management. The curriculum also included Liberal Arts. In 1951, three years after the State University of New York had been established and state law had provided for the creation of community colleges, FIT became the second SUNY community college empowered to grant the Associate in Applied Science (AAS) degree. By then, there were 400 day students and about 1,000 evening students.

FIT received accreditation in 1957, and as the curriculum and student body grew, the college moved into its first real home—a nine-story building on Seventh Avenue in the heart of the garment district—in 1959. The building had been planned for 1,200 students; by 1963, there were 4,000. During this time, the college’s curriculum was growing beyond traditional notions of fashion, to include subjects like photography and advertising and interior design.

The college wanted to further expand its curriculum by offerings bachelor’s and master’s degrees— something that “was just not done” by a community college, according to the State University’s former chancellor. Representatives of the college and supporters in the industry and government lobbied hard to persuade legislators to allow FIT to do this. In 1975, an amendment to the Education Law of New York State permitted FIT to offer BS and BFA programs; another in 1979 authorized master’s degrees.

By this time, six more buildings had been added to the campus, including two dormitories, and the Shirley Goodman Resource Center, which houses the Gladys Marcus Library and The Museum at FIT The school continued to grow by adding modern facilities, like the Design/Lighting Research Laboratory and the Annette Green Fragrance Foundation Studio (the first of its kind on a college campus), making international programs available to students, and evolving its academic offerings.

Today, the campus encompasses an entire city block and serves more than 10,000 students. The college offers degrees in diverse subjects, such as Menswear and Cosmetics and Fragrance Marketing, which are unique to the college, and Fashion Business Management, Spatial Experience Design, and Toy Design, the first of their kind in the country.

FIT’s academic buildings are named for individuals who have made significant contributions to the development of FIT and the industries we serve.

David Dubinsky was a labor leader who was president of the International Ladies Garment Workers Union (ILGWU) for more than 30 years. He helped create the Congress of Industrial Organizations (CIO), a federation of unions that organized workers in industrial unions, and was a founder of the American Labor Party and the Liberal Party of New York in the 1930s and 1940s.

Marvin Feldman, FIT’s longest-serving president, held the position from 1971-92. During his tenure, the college began offering bachelor’s and master’s degrees, enrollment grew to 12,000 from 5,000, and six new campus buildings were constructed, bringing the total to eight.

Fred P. Pomerantz was founder and former chairman of Leslie Fay, Inc., a leading New York producer of women’s apparel from 1974-82. He served on the Board of Directors of FIT’s Educational Foundation for the Fashion Industries from 1967-78. After his death in 1986, the building was named for him in recognition of a donation by his son, John J. Pomerantz, a former member of FIT’s Board of Trustees and foundation.

Shirley Goodman came to the college in 1949 to help draft the legislation making FIT part of the SUNY system. She was a key figure in the college’s development and served for many years as executive director of FIT’s Educational Foundation for the Fashion Industries (now the FIT Foundation), a position she held until her death in 1991.