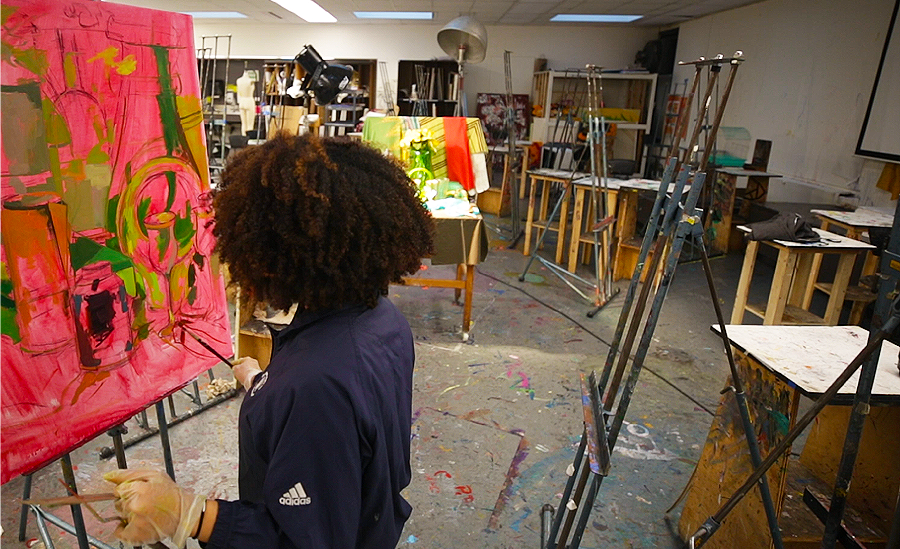 **The latest documentary “Through Our Eyes 2020”   premiered during Civility Week and is available online now!

After receiving a Collaboration Grant and creating their first documentary and hosting an exhibition in Fall 2019, the POCreatives team wanted to find a way to extend the life of this project and connect to future students. They found a way through FIT’s Think Big/CGI U process through which they turned the project into a Commitment to Action, applied, and were accepted to the Clinton Global Initiative University (CGI U) . Original member Kenji had graduated but Ashley and Will participated in a year-long curriculum and mentoring through CGI U and attended the international meeting that was meant to be in Scotland but was shifted to a virtual program dedicated to the topic of the COVID-19 pandemic.  They have now added new member Aurora Hinz and the project has evolved and recently changed their name. Here is the group’s statement regarding their direction and name change:

“ Spotlight is a student-run organization which produces art exhibitions, films, zines, and more in hopes to amplify the voices of Black, Indigenous, P.O.C, and LGBTQ+ students at the Fashion Institute of Technology. Our goal is to create a community of artists and creatives who value inclusion, intersectionality, and action-based allyship.

We decided to change our former name from POCreatives to Spotlight due to two main reasons. Firstly, the term “P.O.C.” (People of Color) has recently evolved to the acronym “B.I.P.O.C.” (Black, Indigenous, People of Color). The uses of these two acronyms has been adopted by many organizations and businesses which has raised concerns over the use of virtue-signaling. Secondly, while some Black and Indigenous people feel included in the term “P.O.C.”, others do not. Some members of these communities find the term “B.I.P.O.C.” to be essentially meaningless, as many Indigenous cultures also identify as Black. In solidarity with these communities, we have decided to change our name to “Spotlight” to disengage from the practice of diversity-marketing, and to ensure that we are not using language to describe marginalized communities in ways that they themselves find to be misrepresentative.”

Spotlight FIT premiered this socially distanced documentary during Civility Week  to amplify voices of Black, Indigenous, and POC students at FIT. The 2019–20 academic year impacted students’ lives deeply. The documentary features interviews with eight current and former FIT students regarding how the 2019–20 academic year, in addition to racism on campus, affected their educational and creative lives. The students discuss their experiences with a racist incident at the MFA Fashion Show, the COVID-19 crisis, and the Black Lives Matter uprisings across the nation .

You can still see the original POCreatives documentary Someone Who Looks Like Me!

POCreatives are a group of FIT students who received the Collaboration Grant in Spring 2018. The students used the grant to create a student art exhibition and documentary with the intent of providing a platform for students of color from any major to have their work shown. The exhibit and documentary, both titled For Someone Who Looks Like Me, received over forty student submissions to be featured.

There are three events associated with this project:
• Documentary Screening on October 10, 2019 in Pomerantz D-207 at 1pm
• Exhibition in the Feldman lobby from October 15 to November 1, 2019
• Artist Gathering for the exhibited students on October 22, 2019 during Civility Week

For the past eight months, the students have been shooting the documentary to gain a more intimate look into the lives of FIT students of color. The exhibition in the Feldman lobby brings this diverse representation to the forefront of the FIT community and makes it more visible to everyone on campus. The Artist Gathering during Civility Week will then bring these artists together to have a community where they can feel comfortable and relate to one another.

The short documentary follows four students: a fashion designer, a dancer, a drag queen, and a painter. Throughout the film, the subjects share how their cultural backgrounds influence their creativity and the problems they face as people of color in their respective art fields. The film was created with help from the Film, Media, and Performing Arts department and will be shown at FIT’s screening room in Pomerantz D-207, on October 10th at 1pm. Following the film, Professor Amy Lemmon will moderate a Q&A discussion with the film creators and audience about the film’s themes and the role diversity plays in art. Lastly, the documentary will be played on a loop on a monitor in the Feldman lobby as part of the exhibit to gain a wider audience.