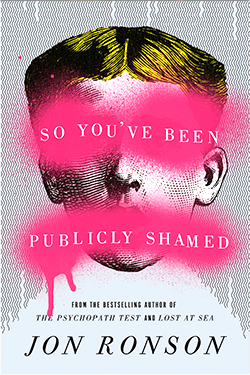 So You’ve Been Publicly Shamed

We are very happy to announce the 2017-18 Common Read selection for the FIT community, and particularly for incoming freshmen, is Jon Ronson’s So You’ve Been Publicly Shamed.

The nonfiction book is about online shaming and its historical antecedents, and focuses on the recent re-emergence of public shaming as an online phenomenon, particularly on Twitter.

This relevant and accessible book is, we feel, particularly well-timed for our current social and political climate, and the subject is already very much on the minds of our students. Further, the Common Read aligns with the FIT Strategic Plan objective to provide an empowering student experience in a cohesive community.
More about the Author
Jon Ronson is a Welsh journalist, author, documentary filmmaker, and radio personality whose works include the best-seller The Men Who Stare at Goats, The Psychopath Test, Frank: The True Story that Inspired the Movie and of course, So You’ve Been Publicly Shamed. Jon regularly contributes to The Guardian, BBC Radio 4 via his series Jon Ronson On…, This American Life, GQ, The New York Times Book Review, The Daily Show with Jon Stewart and he has appeared at TED discussing So You’ve Been Publicly Shamed and The Psychopath Test. (from jonronson.com)

More about So You’ve Been Publicly Shamed
So You’ve Been Publicly Shamed is Ronson's tour through a not-necessarily-brave new world where faceless commenters wield the power to destroy lives and careers, where the punishments often outweigh the crimes, and where there is no self-control and (ironically) no consequences. On one hand, part of what makes this book (again, ironically) so fun to read is a certain schadenfreude; it’s fun to read about others' misfortunes, especially if we think they "had it coming." Jonah Lehrer, whose admitted plagiarism and falsifications probably earned him his fall, stalks these pages. But so does Justine Sacco, whose ill-conceived tweet probably didn’t merit hers; as it turns out, the internet doesn’t always differentiate the misdemeanors from the felonies. But the best reason to read this is Ronson's style, which is funny and brisk, yet informative and never condescending. So You’ve Been Publicly Shamed is not a scholarly book, nor is it a workbook about navigating ignominy. It's an entertaining investigation into a growing—and often disturbing—demimonde of uncharitable impulses run amok. —Jon Foro (via Amazon.com review)