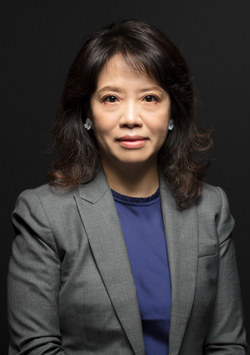 Dr. Pyun is a specialist of Asian art as well as European medieval art. She has published on topics related to Asian American visual culture and the reception of Asian art in Europe and North America.
She developed her doctoral dissertation into a book on Jean Pucelle and has written on the Remède de Fortune Master and Guillaume de Machaut, all active in the fourteenth century. Her other research interests include the global trade of luxury and decorative arts in pre-modern Eurasia and Americas; usage and reception of visual art in context of religious performance and liturgy; interplay of word and image; and the history of art collections. In recent years, she has collaborated with scholars of Asian American studies.

Professor Pyun’s experience teaching the diverse range of cultural exchange between Europe and Asia has manifested in other forms, such as her article “A Journey through the Silk Road in a Cosmopolitan Classroom” in Teaching Medieval and Early-Modern Cross-Cultural Encounters Across Disciplines and Eras edited by Lynn Shutters and Karina Attar (Palgrave, 2014). She was a 2015 recipient of the Field Research Grant Korea Foundation for a project called "Decoding Landscape in Portraiture Painting: A Cross-cultural Perspective." She was a Leon Levy Fellow for the Center for History of Collecting at the Frick Collection in 2017. Established at the Frick Art Reference Library in 2007, this prestigious long-term fellowship supported her book project entitled “Collecting Asian Art: Discerning Languages for Exotic” as part of the Center’s mission to encourage the study of collectors and collections of fine and decorative arts in Europe and the United States from the Renaissance to the present day. Forthcoming is the co-edited volume, Fashion, Identity, and Power in Modern Asia (under contract with Palgrave Macmillan), which will discuss dress reforms in modern Asia and will include essays by costume/fashion historians, literary scholars, and art historians from China, Japan, Taiwan, Korea, U.K., and the U.S.

Before coming to FIT, Dr. Pyun taught at many colleges and universities in New York, including the Pratt Institute, Brooklyn College, Hunter College, Wagner College, Manhattanville College, Montclair State University, New School University, Parsons School of Design, and The Cooper Union for the Advancement of Science and Art. In addition to teaching, Dr. Pyun contributes to not-for-profit organizations that support visual artists and advocate their works, especially public art projects. She is a member of the College Art Association, International Congress on Medieval Studies, Alliance of American Museums, and the Association of Asian Studies. She has also developed programs and written grant proposals for the Archive of Korean Artists in America (AKAA). She is often invited to give public talks on broad topics of art and culture. She has been a curator of contemporary art since 2011, with exhibitions including the Lineage of Vision: Progress through Persistence held at the Korean Cultural Center New York in 2014 and the Violated Bodies: New Languages for Justice and Humanity at the Anya and Andrew Shiva Gallery, John Jay College of Criminal Justice; the Amelie A. Wallace Gallery, SUNY Old Westbury in 2018.

Professor Pyun is engaged with initiatives of digital humanities and global learning. She teaches the online courses East Asian Art and Civilization (HA221) and Korean Art and Civilization (HA229) at FIT’s Center for Online Learning and Academic Technologies. She developed a blended format for the course Art in New York (HA214). She participated in the Latin America Academy for The US-Mexico Multistate COIL Program (MCP) organized by The Collaborative Online International Learning (COIL) Center, SUNY in 2016. She has taught a COIL module with Professor Angelica Sterling at Universidad del Caribe, Cancun, Mexico since 2016 and another collaborative learning with Professor Ruiling Feng and Professor Yingjie Li at Tianjin Normal University in 2017 (coilcollaboration.com). Her collaboration with the Kansai University in Osaka, Japan was presented at the SUNY COIL Conference in March 2018. She also received SUNY Innovative Instructional Technology Grant (SUNY IITG) in 2016-2017 (tier 1) to create a web-based platform for educational videos, called Diverse Techniques of Asian Art and Crafts: Interactive Media (bamboocanvas.org). She renewed the IITG for 2017-2018 (tier 3) and has directed a larger project entitled the Bamboo Canvas: Instructional Innovation in a Globalized Classroom with a regional conference held in November 2018. Since 2014, Professor Pyun has co-organized the lecture series Primary Sources in Costume/Textile History and Design with fellow FIT Professors Lourdes Font and Justine De Young. This lecture series hosts four speakers each year and is funded by the Student-Faculty Corporation of Fashion Institute of Technology. In the summer of 2017, Pyun completed the eight-week Curatorial Workshop of the Korean Historical Costume organized by The Korean Society of Costume in Seoul, South Korea.

Most recently Professor Pyun in collaboration with Professor Daniel Levinson has won a prestigious and lucrative National Endowment of the Humanities Grant entitled Teaching Business and Labor History to Art and Design Students. Not only was this the single largest academic grant of its kind received in FIT history, it was a project that draws on the unique strengths of FIT as an institution that prepares students for careers in the complex intersection of art, business, and labor history. She served as a Fulbright Specialist for the summer of 2019 at the Korea National University of Arts (K-ARTS) in Seoul, South Korea, where she helped faculty at K-ARTS develop project-based learning opportunities for virtual study abroad based on her experience of Collaborative Online International Learning (COIL) with international partners in Mexico, China, and Japan. She received the 2018-2019 State University of New York Chancellor's Award for Excellence in Scholarship and Creative Activities.

“The Master of the Remède de Fortune and Parisian Manuscript Production circa 1350.” In An Illuminated Manuscript of the ‘Collected Works’ of Guillaume de Machaut (BnF, ms. fr. 1586): A Vocabulary for Exegesis, ed. by Domenic Leo (Turnhout: Brepols, 2017), forthcoming.

“A Journey through the Silk Road in a Cosmopolitan Classroom.” A chapter in Teaching Medieval and Early-Modern Cross-Cultural Encounters Across Disciplines and Eras edited by Lynn Shutters and Karina Attar (New York: Palgrave Macmillan, 2014), pp. 53-70

“The Decorative Program of the V&A Missal of Saint-Denis and the Liturgy at the Royal Abbey in the Fourteenth Century.” New York Medieval Liturgy Group Lectures at MOBIA (Museum of Biblical Art) in New York City, 15 September 2005