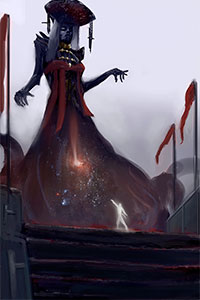 Students in the Master of Fine Arts in Illustration program develop their studio practice in drawing, painting, and digital media—and the integration of all three. Through a focus on studio practice along with classes on creative writing and research, students gain a broad perspective on the illustrators role across different media. Students work in a range of areas, such as animation, concept art, children's books, graphic novels, murals, and reportage. The program culminates in an annual visual thesis exhibition in Gallery FIT.

Exit Lines. An ending to a beginning. Like the exit line spoken by an actor as he leaves the stage, this exhibition represented the close of our own performance at FIT, and the start of a new act. 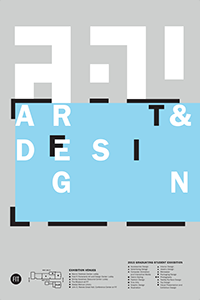 The projects on view were the culmination of each student's unique experience in FIT's undergraduate Art & Design programs and featured juried selections, thesis work, and award-winning projects. 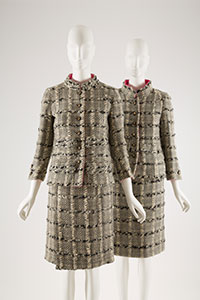 Faking It: Originals, Copies, and Counterfeits explored various levels of authenticity in fashion using approximately 100 objects from the museum's permanent collection. Throughout the past 150 years of fashion history, couture copies, diffusion lines, and licensing agreements have blurred the line between what is genuine and imitation. Meanwhile, the exponential growth and sophistication of the counterfeit industry has made it increasingly difficult to identify an inauthentic item. Faking It shed light on the complexities surrounding these topics. 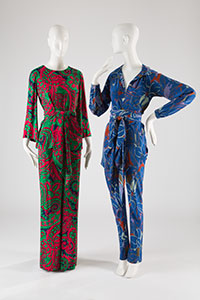 Yves Saint Laurent and Halston were the most famous and influential fashion designers of the 1970s. Drawing inspiration from menswear, foreign cultures, and historical periods, Saint Laurent and Halston crafted a new, chic, and modern way of dressing that became synonymous with the sexy and glamorous lifestyle of the decade. While they and their designs are recognizable to fashion enthusiasts and monographic books and exhibitions on each designer abound, Yves Saint Laurent + Halston: Fashioning the 70s was the first exhibition to juxtapose and analyze their contributions to fashion at the height of their careers, as well as how they came to exemplify this singular, dynamic era in fashion history.

Read more about the exhibition. 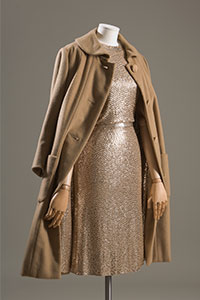 Lauren Bacall: The Look was a celebration of the film and theater star's unique style. Bacall's own garments took the spotlight in this exhibition, which also explored her relationships with fashion designers who dressed her, including Marc Bohan, Pierre Cardin, Norman Norell, Yves Saint Laurent, and Emanuel Ungaro. Students in the Fashion and Textile Studies: History, Theory, Museum Practice MA program in FIT's School of Graduate Studies collaborated with MFIT to present 12 items from a collection of 700 that Bacall donated to the museum in 22 gifts, between 1968 and 1986. 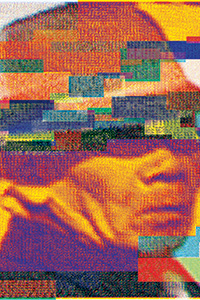 This exhibition of multimedia projects was initiated by faculty from the Fashion Institute of Technology's School of Art and Design and brought together student artwork from FIT, Gachon University in South Korea, and Kun Shan University in Taiwan. Visiting Professor Chang Soo Kim's work was also showcased. 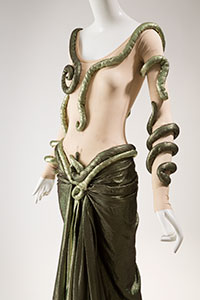 Dance & Fashion explored the relationship between two great embodied art forms: dance and fashion. Dance has utilized a wide variety of costumes, including contemporary fashions, to identify different characters, but there are also certain iconic styles, which represent a dance more abstractly. Tutus and pointe shoes, for example, are integral to the image and movements of the ballerina, just as leotards and tights are associated with the modern dancer.

Traditionally, dance costumes were created by dancers (such as Martha Graham), artists (such as Léon Bakst), and costume designers (such as Karinska).  But in recent years, fashion designers have increasingly been invited to create dance costumes. For example, Yves Saint Laurent and Valentino designed for the ballet and Rei Kawakubo of Comme des Garçons provided costumes for Merce Cunningham. Fashion designers have also been inspired by the dance. Christian Dior loved the tutus of Romantic ballerinas, while the shoe designer Christian Louboutin has transformed pointe shoes into fetishistic high heels. The focus of this exhibition, organized by Dr. Valerie Steele, was on ballet and modern dance, but other dance forms, such as tango, flamenco, and stepping were featured.

Read more about the exhibition. 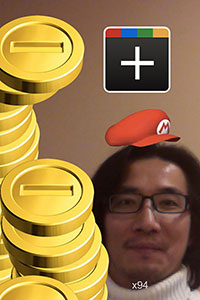 ESC: Digital Artworks by C. J. Yeh investigated and illustrated the life, career, and thoughts of Art & Design faculty member C. J. Yeh, and looked at how the digital revolution has resulted in a new cultural paradigm centered on social networking. The exhibition included artworks from four different bodies of work: CJ Was Here, a series of conceptual mixed-media art; De-Purpose, a series of interactive installations; Equals, a series of net art (artworks using the Internet as its primary medium or platform); and vWare 1.0, a series of visual software programs inspired by literature. 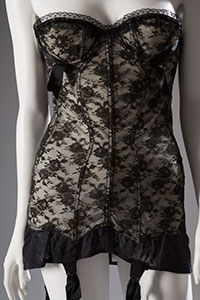 Exposed: A History of Lingerie examined intimate apparel from the 18th century to the present, featuring over 70 of the most delicate, luxurious, and beautifully crafted objects from the museums permanent collection. Each piece illustrated key developments in fashion, such as changes in silhouette, shifting ideals of propriety, and advancements in technology.