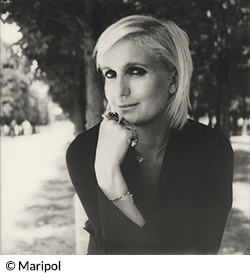 The Couture Council of The Museum at FIT honored Maria Grazia Chiuri, creative director of women’s haute couture, ready-to-wear, and accessories collections for Dior, with its 2022 Couture Council Award for Artistry of Fashion at a luncheon on Wednesday, September 7, 2022, at the David H. Koch Theater at Lincoln Center in New York City. Heralding the arrival of New York Fashion Week, the annual fall event benefits MFIT, New York's only museum dedicated exclusively to the art of fashion. The presenting sponsor was Nordstrom.

The Couture Council is a membership group that supports The Museum at FIT, "the fashion insider's fashion museum." Through membership dues and ticket sales to the annual Couture Council Award for Artistry of Fashion, the Couture Council helps make it possible for the museum to mount world-class free exhibitions that educate and inspire diverse audiences, to build and conserve its extraordinary permanent collection, and to organize free public programs that serve both FIT students and the general public.

Members of the Couture Council are invited to all of the museum’s opening receptions and other special member-only fashion events.

The Couture Council is pleased to offer the following new membership levels:

Join or renew online via our secure website using your credit card.

Founding Members and Past Chairs

Private tours of exhibitions at The Museum at FIT.

Lectures with Michael Kors, Zac Posen, and Ruben and Isabel Toledo at the Doubles Club.

Cocktails and Conversation with Peter Copping of Oscar de la Renta at the Core Club.

Cocktails and Couture with Bibhu Mohapatra at the Core Club.

Cocktails and Conversation with Jason Wu.