Hurly-Burly is an exciting collection of works by the fifth class of MA in Illustration graduates from the School of Graduate Studies. These illustrations reflect the independently-minded mission of the program.

As the name Hurly-Burly implies, our studios have been filled with activity—the bustle of the classroom has given way to walls rich with a broad range of media and ideas. Along the way, deep bonds, lasting friendships, and collaborations have been born and will flourish. The show represents a unique group of students who embody the very essence of diversity in their backgrounds, as well as their influences. The confluence of cultures has elicited a rich environment that has provided a platform for growth on levels that extend far beyond the printed page. The art selected is the culmination of each students unique experience in the Fashion Institute of Technology's diverse, challenging, and demanding undergraduate Art & Design programs. Featuring juried, award winning, and thesis projects, this presentation is the manifestation of several years of research, experimentation, critical thinking, and artistic proficiency. The Graduating Student Exhibition advances the Colleges applied philosophy that integrates practice in industry with theory and teaching inside the studio. 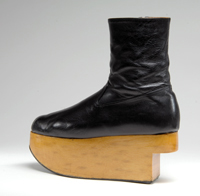 Vivienne Westwood, 1980-89 focused exclusively on Westwood's fashions of the 1980s and highlighted the significant shift in Westwood's design style during this decade. Her work of the early 1980s was prominently featured in edgy magazines such as i-D, and her following was comprised mainly of street-style insiders. By 1985, her more structured, feminine, and historically-inspired styles began to attract the attention of the mainstream press and widened Westwood's audience. The exhibition included a unisex ensemble from the Pirate collection (1981), a woman's ensemble from the influential Buffalo collection (1982) and a pair of Westwood's iconic Rocking Horse boots from the Harris Tweed collection (1987). Editorial photographs from magazines such as The Face and British Vogue further illuminated Westwood's impact on 1980s fashion, as did the runway footage and video interviews with the designer. 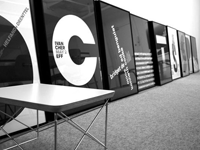 The exhibition gotoAndPlay(); reflected the youthful vision of the young designers in the Media Design Club at FIT. It included a selection of interactive and time-based design projects with game-like qualities which engaged audiences in a playful, charismatic, and compelling manner. Approximately 120 projects from 100 students were reviewed, and the Exhibition Planning Committee of the department of Communication Design selected the top 30 pieces for the exhibition. The exhibition also included an award-winning poster series by Professor Rocco Piscatello. 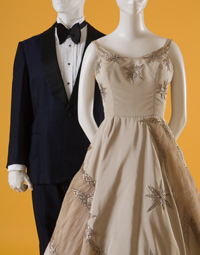 His & Hers explored the relationship between gender and fashion over 250 years. Clothing can act as an immediate signifier of gender however, while making distinctions between masculine and feminine styles of clothing may seem natural, gendering is not a biological phenomenon. The exhibition discussed the changing ideas of "appropriate" attire for each gender; it also included examples of so-called unisex and androgynous fashion. More than 100 garments, accessories, and textiles from the Museum's permanent collection were featured chronologically, from a seemingly "feminine" 18th-century man's velvet suit to a woman's "power suit" from the 1980s. Also included were works by innovative designers such as Giorgio Armani, Jean-Paul Gaultier, Gianni Versace, and Vivienne Westwood.

The focus of Lightness was to embrace, explore, and exploit the many meanings, interpretations, and associations of "lightness." Lightness is a theme that emerges in many cultures, world religions, and ideologies. Ideas of lightness have also been explored by philosophers and writers such as Friedrich Nietzsche and Milan Kundera. Some definitions of lightness: blaze, glow, sparkle, illumination, weightlessness, buoyancy, levity, play, joy, grace, agility, ease, freedom, light in value, light in color, light as a feather. 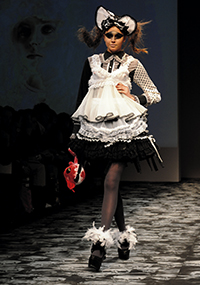 Japan Fashion Now explored how Japanese fashion has evolved in recent years. Japanese fashion today embraces not only the cerebral, avant-garde looks associated with the first wave of Japanese design in the 1980s, but also a range of subcultural and youth-oriented styles, such as the Elegant Gothic Lolita style and the Cosplay phenomenon. In addition, Japanese fashion often has a strong component of realism and an obsessive interest in perfecting classic styles. Contemporary Japanese fashion is globally significant precisely because it mixes elements of realism, such as high-tech fabrics or creating a perfect pair of jeans, with both the avant-garde and pop cultural elements, especially those associated with electronic media, such as manga (comics), anime (animated cartoons), and video games. More information about this exhibition here. 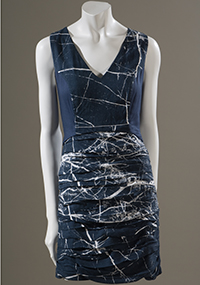 Presented chronologically and featuring more than 100 garments, accessories, and textiles, the exhibition used contemporary methods for "going green" as a framework to study the past. The objects displayed each touch upon at least one of six major themes: the re-purposing and recycling of materials, fiber origins, textile dyeing and production, quality of craftsmanship, labor practices, and the treatment of animals. Curated by Jennifer Farley and Colleen Hill, the exhibition featured some of the finest examples of 21st-century sustainable fashions by current, cutting-edge labels, including Alabama Chanin, Ciel, Edun, FIN, and NOIR.