Fabric is the very stuff of fashion. The desire for textiles has driven the social and economic history of the world. Yet contemporary fashion consumers tend to give little consideration to the textiles they wear. For fashionable individuals of the past, however, textiles were their most valuable possessions. Knowledge of fabrics was commonplace. A stylish eighteenth-century woman knew the high cost of silk brocade imported from China, the difference between wool fabrics appropriate for menswear and women's wear, and that the most colorfast cotton calicos came from India. As late as 1955, market research by the United States Department of Agriculture reported that "nine out of ten women . . . were aware of the fiber content of what they were buying, and used that knowledge in their decision to purchase."

Fabric In Fashion explored the cultural history of textiles in Euro-American women's fashion over the last two and a half centuries in order to re-center the fashion narrative on materiality. The exhibition focused on four of the most common fibers in Western women's fashion: silk, cotton, wool, and synthetics. These fibers can be manipulated to different effects, creating unexpectedly diaphanous cottons and wools, or sturdy and sculptural silks. Synthetics can look sleek and futuristic or, conversely, mimic natural fibers and hand- crafted fabrics. 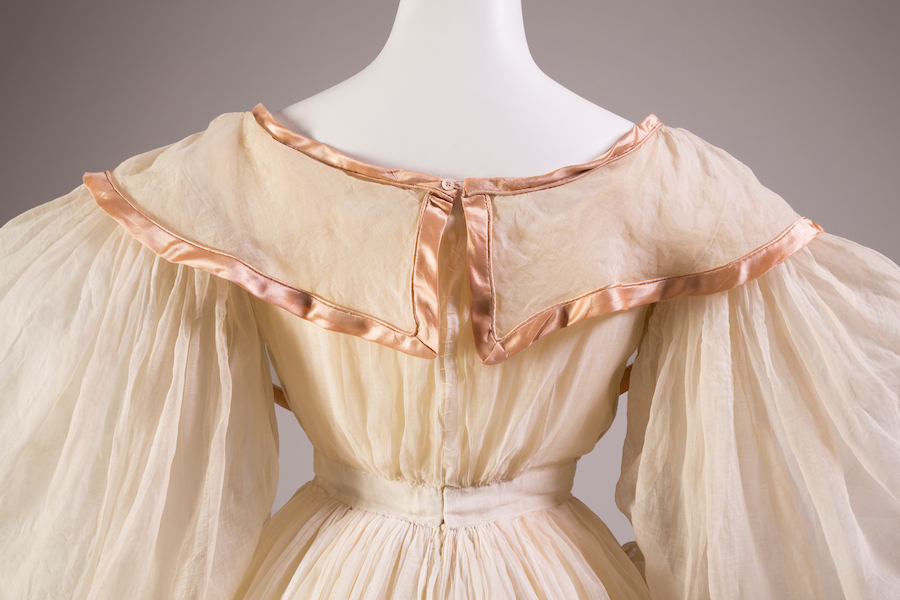 Fabric in Fashion | Introduction to Fibers (2:16)

Fabric is foundationally important in creating silhouette and aesthetics. The structure of a textile, woven or knitted, comprises unique qualities that help determine the shape of the final design. Silk, for example, can be woven into an airy, plain-weave chiffon that floats away from the body or into a compound weave — incorporating complex structures, multiple textures of yarn, and several colors — to form a dense, sumptuous material that falls in dramatic folds.

The ultimate luxury fiber for millennia, silk inspired a demand in Europe that gave rise to the trade network that would connect all of the Old World. Originating in China, silk textiles such as brocades and damasks whetted European appetites for Asian aesthetics, a trend that still recurs in Western fashion. Silk was also the backbone of the French textile industry, centered in Lyon from the fifteenth century. Lyon helped Paris become the Western world's fashion capital, feeding nineteenth- and twentieth-century couture houses the material they needed to set trends across continents.

Wool financed the growth of the British economy, beginning in the Middle Ages. Wool's unique ability to contour with heat and moisture facilitated the quintessentially Western fashion for tailored garments. Then, as England's commercial empire globalized during the eighteenth century, the country embraced cotton, spurring colonization in India as well as Britain's industrial revolution. Once a high-priced novelty, cotton became an accessible, every-day fabric by the late nineteenth century. The effects of its industrial growth rippled across the globe, from disenfranchisement and oppression in India, to the enslavement of Africans in the Americas and the exploitation of factory workers in Europe and the United States.

The industrial revolution created a nineteenth-century consumer boom. Textiles, once precious and expensive, were more readily available than ever before. Complex fabrics previously woven by hand could be produced mechanically, allowing women's fashion to explode into a profusion of fabrics and trims on voluminous silhouettes. At this time, Western society rigidly separated roles by gender, and fashion consumption was deemed a feminine pursuit. By the early nineteenth century, rich velvets, delicate nets, and gleaming satins were almost exclusively worn by women, while dark wools, punctuated by bright, white cottons, were considered masculine.

Nineteenth-century scientific progress also yielded new fibers. Rayon was the first man-made fiber, marketed as an alternative to silk during the early twentieth century. Truly synthetic fibers followed. Made from petroleum by-products, these included nylon (1935) and polyester (1941). Thermoplastic synthetics presented fashion designers with a new medium. Manifesting in countless iterations and blends, synthetics expanded the variety, function, and availability of textiles, though they also intensified fashion's pollution of the environment.

Fabric In Fashion invited visitors to examine the objects on display, taking particular note of the materials, their complexities, and their changing roles throughout history. Within high fashion, fabrics are explicitly and carefully chosen. They illuminate their moments in fashion and culture.

Fabric In Fashion was organized by Elizabeth Way, assistant curator of costume at The Museum at FIT.

The desire for textiles

The desire for textiles has driven the social and economic history of the world. Yet contemporary fashion consumers tend to give little consideration to the textiles they wear. 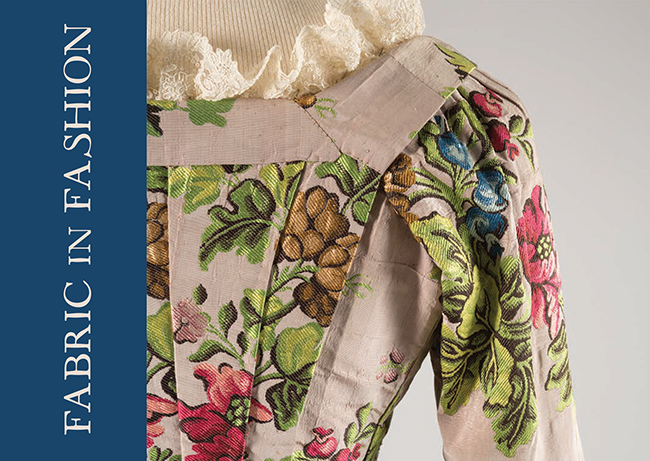 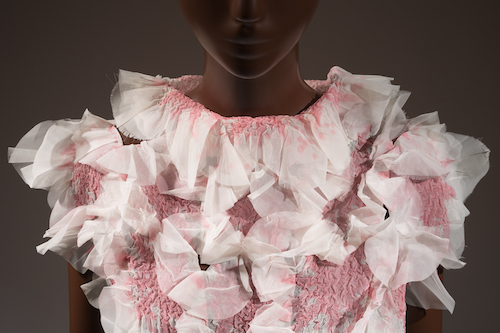 Collection Objects in the Exhibition

Find more information about objects in the exhibition and view object and installation images.
Explore here
©