Eleanor Lambert was a pioneer in the advocacy of American fashion.

Her tireless efforts laid the groundwork for the recognition of New York as an international fashion capital. Her impact is still felt in the fashion industry as well as the culture at large. Today, designers are elevated to celebrity status and honored annually at the CFDA Awards. 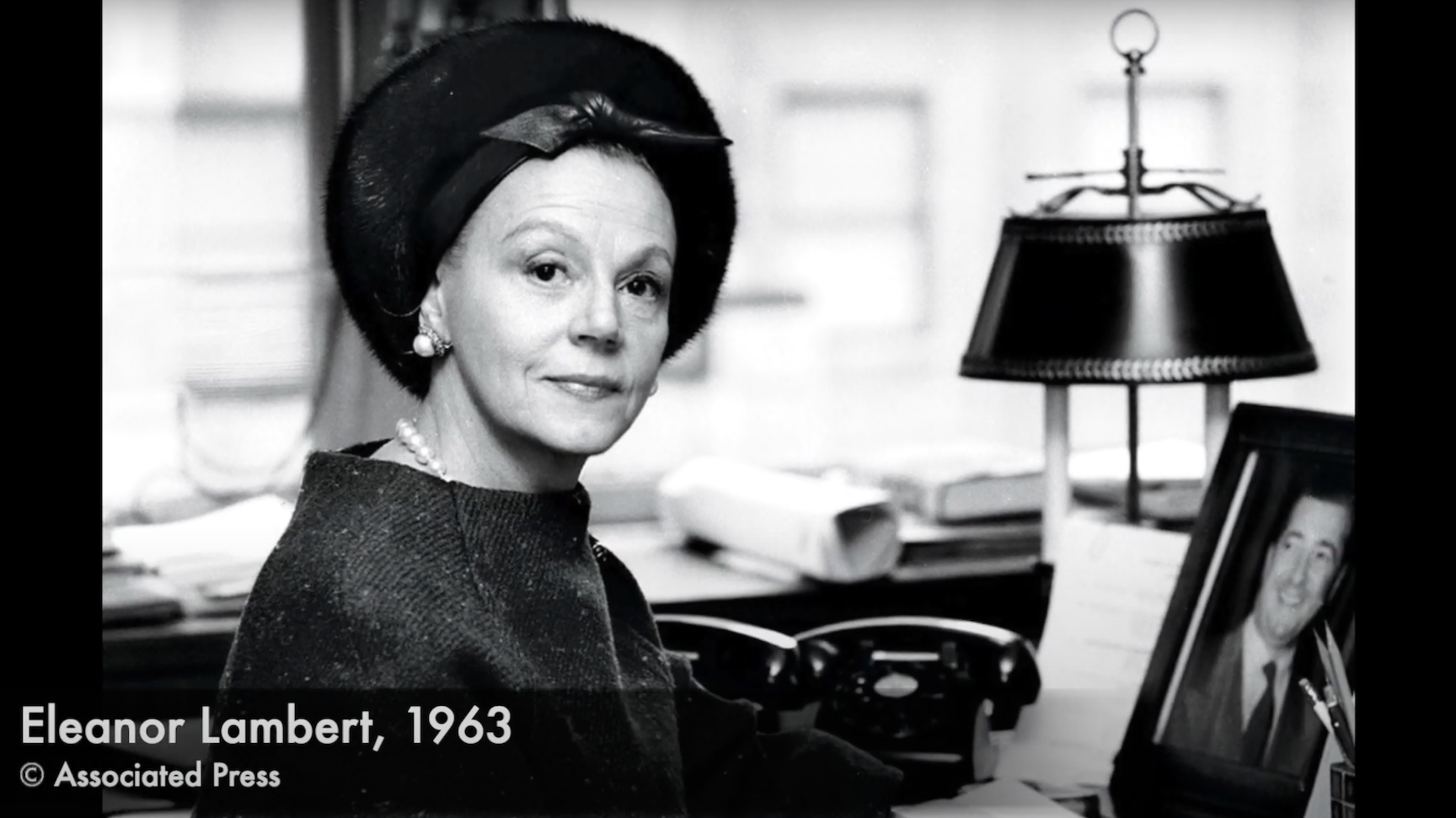 The Fashion Institute of Technology’s School of Graduate Studies and The Museum at FIT (MFIT) presented Eleanor Lambert: Empress of Seventh Avenue, on view March 3 – 28, 2020, the first exhibition to explore the life of Eleanor Lambert (1903–2003) and her tireless advocacy for American fashion designers and the New York fashion industry. Lambert is widely recognized as the original fashion publicist and, over the span of her 75-year career, she worked passionately to legitimize New York and the United States as international fashion centers.

Curated by the students of FIT’s Fashion and Textile Studies: History, Theory, Museum Practice Master of Arts program, the exhibition featured items from the collection of MFIT and archival materials from Gladys Marcus Library’s Special Collections and College Archives (SPARC) at FIT. SPARC serves as the repository for Eleanor Lambert’s papers.

Eleanor Lambert: Empress of Seventh Avenue began with an archival film of Lambert greeting attendees at New York Press Week in 1947, an event she established to help promote American fashion designers and their collections during World War II. Lambert and her many contributions to the American fashion industry were highlighted, including the establishment of the International Best-Dressed List (1940), the founding of the Coty American Fashion Critics’ Award (1942), the formation of the New York Dress Institute’s Couture Group (1953), and the establishment of the Council of Fashion Designers of America (CFDA) in 1962.

A photograph of Lambert at work greeted visitors, along with a Bill Blass–designed coat from her personal wardrobe, donated to MFIT. “To tell you the truth,” said Blass, “I really don’t know what she does, but it works.” Although the job of a fashion publicist was little understood during the mid-20th century, this exhibition explored the intricacies of Lambert’s promotional work and uncovers the impact she made as the “Empress of Seventh Avenue,” which helped to establish New York as an international fashion capital.

The exhibition included five sections. The first, “Organizations,” featured the initiatives that Lambert began, including the CFDA and the Coty Awards. The Coty Awards were esteemed as Seventh Avenue’s highest honor for decades, and was the precursor to today’s CFDA awards. A copy of the original announcement of the formation of the CFDA was displayed, along with an original program from the first Coty Awards ceremony.

The second section, “Fashion Meets Politics,” explored Lambert’s connection and involvement with prominent political figures, including a number of presidents and first ladies. When Jacqueline Kennedy, the soon-to-be first lady, was criticized in Women’s Wear Daily for buying French fashions, she turned to Lambert for help managing the negative press. Lambert proposed her client Oleg Cassini, an American designer, dress Kennedy. On display was the Women’s Wear Daily article, Kennedy’s response letter, and a letter from Lambert complimenting Kennedy on her appointment of Cassini as her “secretary of style.”

The third section, “Creative Society,” focused on Lambert’s collaboration with individuals beyond the fashion landscape. Before her career as a fashion publicist, Lambert worked to promote museums and artists, including Salvador Dalí. In 1949, after Lambert’s move into the fashion realm, she facilitated Dalí’s commission to design a campaign for the International Silk Congress, a promotional organization for the silk industry. Dalí’s design was featured on the cover of American Fabrics magazine in 1950, and this project influenced his later work in fashion. The magazine was on display beside a 1951 Dalí design for a tie, both showing a similar butterfly motif. These objects illustrated how Lambert connected and influenced her two worlds: fashion and art.

The “Black Fashion Support” section highlighted Lambert’s support for black fashion models, designers, and publications. A jacket designed by client and FIT alumnus Stephen Burrows and press coverage on the “Battle of Versailles” were featured. Lambert organized this iconic fashion show fundraiser in France in 1973, and it served as an important event to bring international recognition to both black models and American ready-to-wear designers, including Burrows.

The final section, “Eleanor Lambert’s Vision of Seventh Avenue,” displayed Lambert’s clients’ work and illustrated how they created a range of styles, all recognized today as American fashion. This section also highlighted Lambert’s commitment to her clients as their publicist. Her actions helped glorify the American fashion designer who, prior to the mid-20th century, had gone largely unrecognized in favor of manufacturers and department stores.

On display was a 1947 Traina-Norell evening gown designed by Norman Norell, one of Lambert’s most esteemed clients. When establishing Traina-Norell, Anthony Traina, Norell’s business partner, offered the designer more money in exchange for his name not appearing on the garment label. Lambert advised Norell to instead opt for name recognition even though it resulted in a lower salary. In 1943, Norell, won the very first Coty Award for Womenswear, known colloquially as a “Winnie.” During his 42-year career, Norell won more “Winnies” than any other designer.

Also on display was a Hattie Carnegie skirt suit, circa 1949. Carnegie’s suits were admired for their feminine, hourglass-shaped silhouettes. Carnegie, Lambert’s friend as well as her client, was considered a pioneer in the New York industry for labeling her clothing with her own name and for her early adoption of “lifestyle” branding by providing a range of products to her customers. Carnegie’s ethos aligned with Lambert’s desire for increased recognition for American fashion designers.

Lambert’s commitment to promoting American fashion extended beyond her own clients. Lambert was one of the first people to recognize Oscar de la Renta’s talent, so much so that she promoted his work for free. Touched by her early support, de la Renta sent her “back pay” checks for years in thanks, even after he established an in-house promotional team. Oscar de la Renta’s caftan from 1967 was included in the exhibition.

Lambert’s career spanned seven-and-a-half decades and she witnessed dramatic changes in American fashion. A blue sequined dress by client Halston represented the 1970s as a period in which designers rebelled against the rigid fashion system. The dress was similar to designs that Halston showed at his fashion show at the Coty Awards. The show, considered shocking in 1972, was an onstage “happening,” inspired by performance art, and included a range of unorthodox displays, such as models cooking eggs and bacon. Although Diana Vreeland proclaimed that the smell was “the most optimistic fragrance in the world!” other members of the fashion establishment were outraged. Despite the controversy, Lambert defended and continued to support Halston.

Eleanor Lambert was a pioneer in the advocacy of both American fashion and the American fashion designer. Her tireless efforts laid the groundwork for the recognition of New York as an international fashion capital. Her impact is still felt in the fashion industry as well as the culture at large. Today, designers are elevated to celebrity status and honored annually at the CFDA Awards. The biannual New York Press Week is now known as New York Fashion Week, and the Best-Dressed List, established in the United States by Lambert in 1940, continues today overseen by fashion journalist Amy Fine Collins, who was gifted the stewardship of the list by Lambert herself. These and other innovations are a testament to Eleanor Lambert’s enduring legacy.