Home /  The Museum at FIT /  Exhibitions /  Expedition: Fashion from the Extreme
In this section

Expedition: Fashion from the Extreme

Travel to extreme environments is a relatively modern phenomenon. Expeditions to the North and South poles, the highest mountain peaks, the depths of the ocean, and outer space have been widely covered in the press for more than a century. But it was not until the 1960s that these endeavors began to influence fashion. Expedition: Fashion from the Extreme was the first major exhibition to examine this fascinating subject.
Systematic studies of the natural world rose steadily during the 1700s. By the nineteenth century, new scientific disciplines were emerging (evolutionary biology, for example). Charles Darwin’s seminal publication On the Origin of Species (1859), one of the most influential books of its day, helped fuel the desire to explore extreme environments. Expeditions became even more popular thanks to writer Jules Verne, who is often cited as the father of science fiction. Remarkably prescient, Verne anticipated space and deep sea travel decades before they became reality. His books, such as From the Earth to the Moon (1865) and Twenty Thousand Leagues Under the Sea (1870), were based on diligent research of the latest discoveries, but they were also glamorous and exciting. Many explorers have acknowledged Verne’s deep, long–lasting influence – and they, in turn, have inspired practitioners in many creative fields, including fashion.
Examples of Arctic-inspired, fashionable clothing that pre-date the 1960s are rare. During that decade, couturiers such as Madame Grès began to design après ski wear that resembled garments designed for Western explorers and appropriated from clothing invented by the Inuit. Also, Vogue and Harper’s Bazaar sent models and photographers to the Arctic to capture otherworldly images set among the icebergs. During the 1990s and early 2000s, indigenous garments from remote, icy environments increasingly inspired leading designers such as Jean Paul Gaultier, Isaac Mizrahi, and Yohji Yamamoto. More recently, Joseph Altuzarra’s parkas and Karl Lagerfeld’s faux fur creations for Chanel have become coveted high-fashion items. 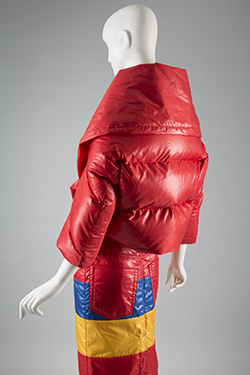 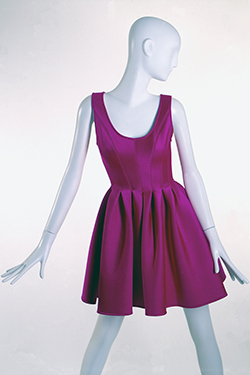 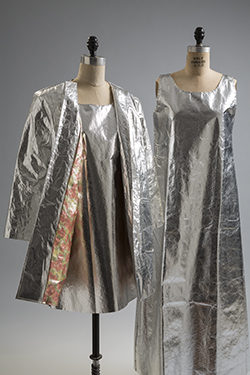 Waste Basket Boutique by Mars of Asheville, dresses, circa 1966, USA. Gift of Ruth Ford and Mrs. D.J. White. Coat, 1966, USA. Gift of Montgomery Ward. 79.45.8, 86.136.9, 90.189.1
The 1930s saw the creation of outerwear made with goose and duck down feathers. The first patented, down-filled jacket was created by Eddie Bauer in 1935, and in 1937, Anglo-American couturier Charles James designed the first high-fashion version, made of eider down and white silk satin. The popularity of down-filled garments rose dramatically when, in 1953, mountaineers Edmund Hillary and Tenzing Norgay became the first humans on record to successfully reach the summit of Mount Everest. By the 1970s, both high-fashion designers and companies specializing in extreme environmental wear were making down and fiber-filled outerwear. Norma Kamali’s “sleeping bag” coat appeared in the late 1970s, and Tommy Hilfiger’s 1990s “puffer” jackets were worn by hip hop stars. Many designers today, from Junya Watanabe to Demna Gvasalia of Balenciaga, create versions of the down-filled coat. 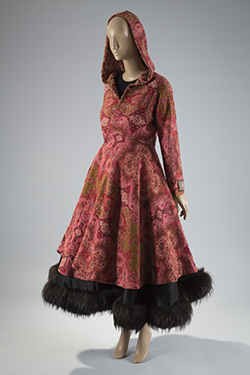 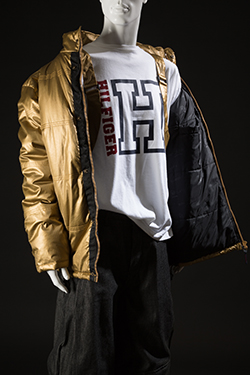 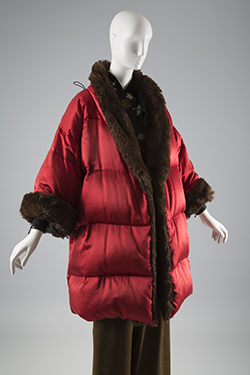 Jean Paul Gaultier, coat, fall/winter 1994, France. Lent by Dorothea Mink. 2005.68.2
Young fashion designers of the 1960s became enamored with the “Space Age,” which began with the 1957 launch of the Soviet satellite Sputnik and ended with NASA’s last moon mission, in 1972. Between 1964 and 1969, André Courrèges, Paco Rabanne, and Pierre Cardin created cutting-edge fashions that were dramatically different from the grand, elegant styles of leading haute couturiers. Theirs was the French response to a global youth movement that had already emerged in London. Parisian “Space Age” miniskirts and pantsuits were sleek and geometric, rendered almost exclusively in white and pale colors with metallic and plastic trimmings. Although Space Age couture signified the ascendance of youth culture, the garments were beautifully crafted in the timeless couture tradition. 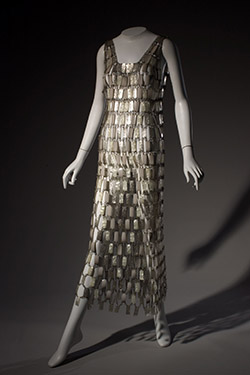 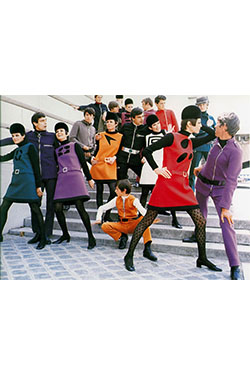 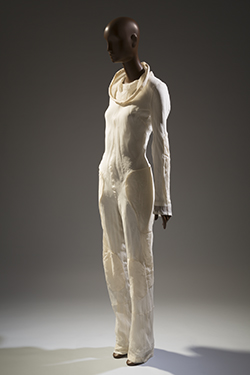 Exploring the depths of the Earth’s oceans is considered by many to be as great a challenge as traveling to outer space. Following World War II, professional and amateur divers began to appropriate scuba and wetsuit technology. Underwater exploration expanded, and throughout the 1960s, skintight wetsuits worn by celebrity aquanauts proved irresistible. Vogue and Harper’s Bazaar regularly featured models in newly colorful wetsuits with vibrant face masks, goggles, and flippers. By the late 1980s, a few fashion designers had begun to experiment with neoprene. Today, it is not unusual to see clothing made from synthetics with a watery sheen or from actual wetsuit materials. And ocean exploration has inspired more than new materials. Designers such as Alexander McQueen have crafted brilliant prints using images of otherworldly, bioluminescent creatures that live in the ocean’s deepest environments. 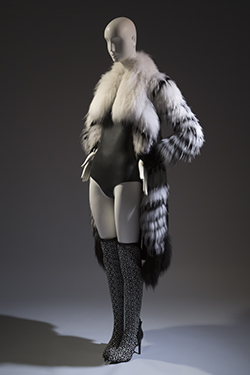 Chanel, jacket, spring/summer 1991, France. 2017.9.1
As fashion works to lessen its impact on the earth’s fragile ecosystem, fanciful interpretations of expedition wear are being replaced by more functional, environmentally sustainable designs. Designers today are increasingly interested in the revelations, the technology, and the visuals of scientific discovery, both in our everyday world and from the extreme.
Expedition: Fashion from the Extreme is also the title of the exhibition’s companion book, published by Thames & Hudson. This was the first collaboration between this illustrious publishing house and The Museum at FIT. Lavishly illustrated, the book featured approximately 150 color photographs of objects from MFIT’s permanent collection, as well as others chosen from runway shows and leading fashion magazines, and unpublished photographs of early expeditions from the archives of institutions such as the Explorer’s Club in New York.
Organized by Patricia Mears, deputy director of The Museum at FIT.
Expedition: Fashion from the Extreme is supported by the Couture Council.