Home /  The Museum at FIT /  Exhibitions /  Pockets to Purses: Fashion + Function
In this section

Pockets and purses are often presented as opposites, yet both function as places to carry and store valuables. A close examination of their history reveals a nuanced interconnection rather than clear divisions between masculine and feminine uses and designs. This linked history was the focus of Pockets to Purses: Fashion + Function, viewed through the lens of fashion design. 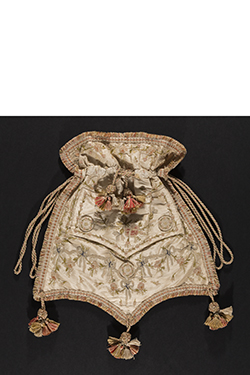 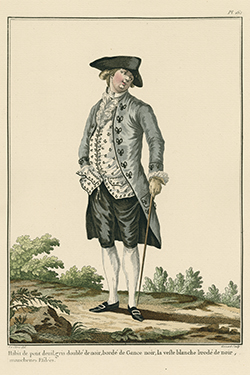 Galerie des Modes et Costumes Français, circa 1779-1787, FIT Special Collections and College Archives, Fashion Plate 162.
During the eighteenth century, men’s pockets were stitched into a waistcoat or a jacket. Embroidery accented the location of the pocket and decorated the garment. However, men’s built-in pockets were limited in what they could hold without the contents disrupting the line of the tailored ensemble. In contrast, women wore detached pockets tied around the waist that remained hidden under their skirts. Voluminous silhouettes allowed women to fill their pockets with a variety of items without creating a bulge. An etiquette book, Eighteen Maxims of Neatness and Order, suggested that women should carry domestic tools, including a needle and thread, thimble, pincushion, pencil, knife, and scissors.
At the end of the eighteenth century, a narrower silhouette emerged, and without the dimension of the previous styles, fashion could no longer conceal a pocket under the skirt. A style of purse known as a reticule appeared. Carried on the wrist, it became a fashionable accessory for women. The exhibition includes a reticule made from a man’s waistcoat with a drawstring cord added to complete the transformation. This composite accessory blends methods of holding belongings, underscoring their linked histories. 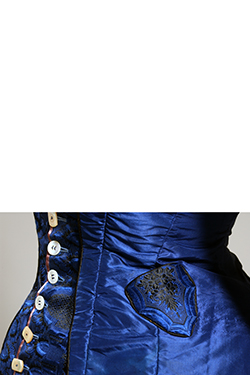 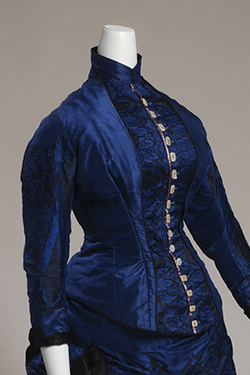 Bodice, silk taffeta, circa 1878, France, The Museum at FIT, gift of Bernice Margulies. 70.65.6
An increase in available leisure time for the middle and upper classes ushered in widespread use of a variety of handbags as well as new pocket functions. During the early nineteenth century, both men and women carried elongated, handcrafted bags, known as miser’s purses. Crafted by women with free time and acquired skills, they demonstrated status and were often presented as gifts to loved ones. Carpet bags were prized by both sexes for their capacity and durability for travel. Specialized pockets in men’s outerwear were designated to hold tickets for the train, the theater, and other events. By the early twentieth century, smoking and applying makeup in public had become more acceptable for women, and purses began to accommodate these activities. A 1925 accessory set includes a coin purse, cigarette case, and cosmetic compact that coordinate to match an evening bag. 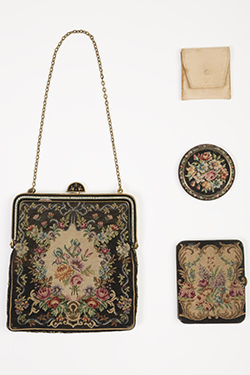 Evening bag and contents, wool and metal, 1920–1930,
France, The Museum at FIT, gift of Charles Enders. 81.60.23
Twentieth-century designers began to explore pockets in women’s garments as elements that could be as fashionable as they were functional. Edward Molyneux added dimensional pockets to a woman’s suit to emphasize her slim waist rather than to hold the contents of her handbag. Claire McCardell included hidden side seam pockets in many of her dresses that could be highlighted by casually placing a hand inside. Bonnie Cashin was well known for her playful pocket designs. Her lime green raincoat includes an appliquéd strap and a twist lock closure around the pocket that mimic the look of a hands-free shoulder bag. 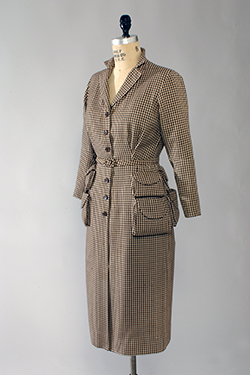 Molyneux, wool houndstooth dress, circa 1948, France, The Museum at FIT,
gift of Mrs. Ephraim London, Mrs. Rowland Mindlin and Mrs. Walter Eytan
in memory of Mrs. M. Lincoln Schuster. 78.134.27
In 1990, Jean Paul Gaultier overloaded a man’s suit jacket with ten cargo and zippered pockets, challenging the traditional design of a businessman’s suit, which could easily incorporate more than two dozen pockets. Such abundant storage space enabled men to forgo the use of a handbag, but pockets could become overstuffed and possessions misplaced. By making pockets a design feature on the exterior of the garment, Gaultier questioned their true purpose in menswear. 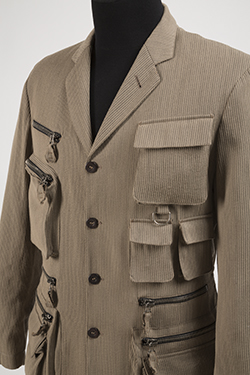 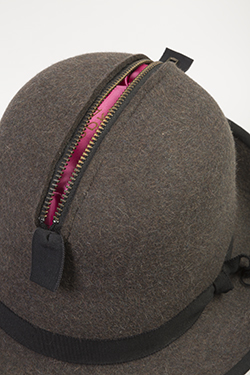 Rod Keenan, hat, wool, grosgrain, and synthetic satin, fall 2006, USA, The Museum at FIT. 2009.14.2
During the late twentieth century, women’s purses began to be used as opportunities for branding. While artistic director of Louis Vuitton, Marc Jacobs partnered with the artist Takashi Murakami in 2003, to amplify the recognizable “LV” logo with Murakami’s signature pop colors and cartoon eyes. This reimagining was largely cosmetic, as the bag’s shape, size, and capacity remained unchanged. A unisex tote bag, such as the one distributed by The New Yorker — on view in the exhibition — included a bold, easily reproducible graphic. Branded totes that unequivocally communicate the interests of the wearer have become ubiquitous. 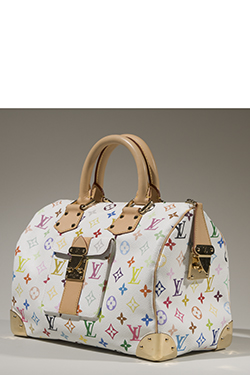 Takashi Murakami for Louis Vuitton, Speedy bag, multicolor monogram canvas, 2003, France, The Museum at FIT. 2010.56.2
Pockets to Purses: Fashion + Function concluded by revisiting the enduring fashionable design of pockets. Otherwise unadorned, a Bill Blass dress and a Versace Versus suit jacket showcase large, embellished pockets. Their prominence recalls the embroidered designs and flaps often seen in eighteenth-century menswear. Updated for the twentieth century, they are fashionable for both men and women. They refer, once again, to the linked histories of all the permutations of pockets and purses. 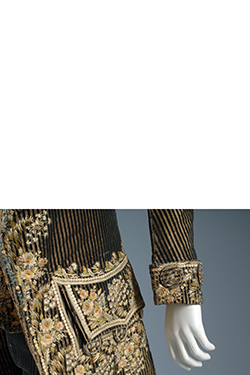 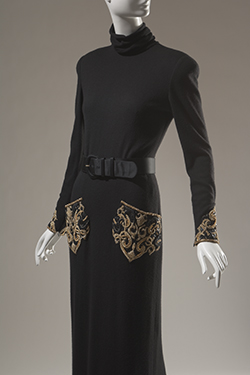 Bill Blass, evening sweater dress with belt, cashmere and satin, fall 1986, USA, The Museum at FIT, gift of Mrs. Savanna Clark. 2001.41.3
Pockets to Purses: Fashion + Function was organized by the graduate students in the Fashion Institute of Technology’s MA program in Fashion and Textile Studies: History, Theory, Museum Practice, with the support of Sarah Byrd, Keren Ben-Horin, and Emma McClendon.
©