Home /  The Museum at FIT /  Exhibitions /  Proust's Muse, The Countess Greffulhe
In this section

Due to loan restrictions, photography is not allowed in this exhibition. You may download installation images via the link above.

Proust’s Muse, The Countess Greffulhe featured extraordinary fashions from the legendary wardrobe of Élisabeth de Caraman-Chimay, the Countess Greffulhe (1860–1952). A famous beauty celebrated for her “aristocratic and artistic elegance,” the countess was a fashion icon comparable to Daphne Guinness today.

Photograph by Otto, the Countess Greffulhe in a ball gown, circa 1887.
© Otto/Galliera/Roger-Viollet.
Proust’s Muse was based on La Mode retrouvée: Les robes trésors de la comtesse Greffulhe, an exhibition organized in Paris by Olivier Saillard, director of the Palais Galliera, Musée de la Mode de la Ville de Paris, which is the repository of the countess’s wardrobe. Dr. Valerie Steele, director and chief curator of The Museum at FIT, had organized the exhibition in New York in collaboration with Saillard. She also contributed an essay, “The Aristocrat as a Work of Art,” to the French catalog.
“The Countess Greffulhe believed in the artistic significance of fashion,” said Steele. “And although she patronized the greatest couturiers of her time, her style was very much her own. Today, when fashion is increasingly regarded as an art form, her attitude is especially relevant.” When Marcel Proust wrote his novel In Search of Lost Time (À la recherche du temps perdu), the Countess Greffulhe inspired his immortal character, Oriane, the Duchess de Guermantes, of whom he wrote, “Each of her dresses seemed like…the projection of a particular aspect of her soul.”
On display was the countess’s famous “Lily Dress” (circa 1896), attributed to the House of Worth and photographed by Paul Nadar. Both the design of the dress and the staging of the photograph owed much to the countess’s ideas. The dress’s princess line, for example, was atypical for the time, but was very flattering to her tall, slender figure. The motif of lilies referred to a verse in her honor, composed by the dandy-poet Robert de Montesquiou, who served as the main inspiration for another of Proust’s characters, the Baron de Charlus. 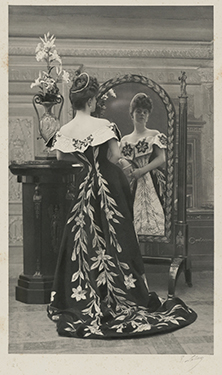 Photograph by Paul Nadar, the Countess Greffulhe wearing the “Lily Dress” created by the House of Worth, 1896.
© Nadar/Galliera/ Roger-Viollet.

House of Worth, “Lily Dress” evening dress, black velvet with application of ivory silk in the form of lilies, embroidered with pearls and sequins, 1896. © L. Degrâces et Ph. offre/ Galliera/Roger-Viollet.
In her correspondence with Montesquiou, Élisabeth Greffulhe confessed, “I don’t think there is any pleasure in the world comparable to that of a woman who feels she is being looked at by everybody, and has joy and energy transmitted to her.” Her fascination with photography, also documented in the exhibition, was related to her desire to fix the image of beauty.
Another highlight of the exhibition was an exotic emerald green and blue robe d’intérieur (1897), which epitomized the countess’s audacious style. She loved to wear green, which complemented her auburn hair. 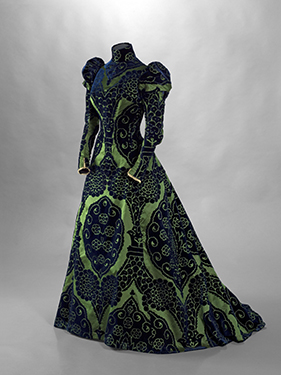 House of Worth, tea gown, blue cut velvet on a green satin ground, Valenciennes lace, circa 1897. © Stéphane Piera/Galliera/Roger-Viollet.
One of the countess’s most famous gowns was the “Byzantine” dress (1904), a gold lamé, pearl-encrusted, fur-trimmed robe de cérémonie, that she wore to her daughter’s wedding. It is said that people in the crowd exclaimed, “My God, is that the mother of the bride?” Although labeled Worth, it was probably created for the countess by the young Paul Poiret. 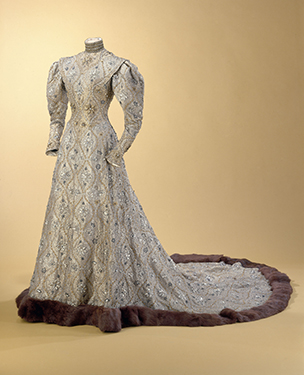 House of Worth, “Byzantine Gown," Taffeta lamé, silk and gold thread, silk tulle, sequins, 1904. © L. Degrâces et Ph. Joffre/Galliera/Roger-Viollet.
A pioneering fund-raiser, the countess was a major supporter of the Ballets Russes, and in the years prior to the First World War her fashions also gravitated toward avant-garde Orientalist styles. When Proust described the exotic Fortuny gowns of his fictional Duchess de Guermantes, evoking “that Venice loaded with the gorgeous East,” he was clearly inspired by the Countess Greffulhe.
During the 1930s, an era of great female designers, she favored sophisticated evening dresses by couturières such as Louiseboulanger, Nina Ricci, and Jeanne Lanvin. (The Countess Greffulhe also raised funds to support the great female scientist Marie Curie.) 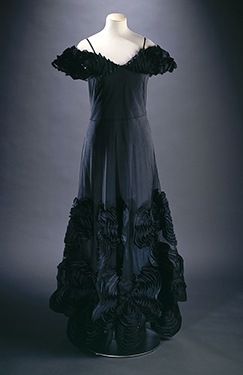 Jeanne Lanvin, evening dress, black tulle and muslin, summer 1937. © P. Joffre et C. Pignol/Galliera/Roger-Viollet.
In addition to the 28 garments on display, there were a dozen accessories—shoes, hats, fans, gloves, and stockings—including a pair of red velvet high-heeled shoes that evoked one of the most famous scenes in Proust’s novel. A selection of photographs depicted the Countess Greffulhe and important contemporaries, including Robert de Montesquiou and Marcel Proust. Finally, there was an ensemble inspired by the Countess Greffulhe and created by the contemporary fashion designer Rick Owens.
A symposium in the Katie Murphy Amphitheatre at FIT held on October 20 featured more than a dozen speakers, including Laure Hillerin, the countess’s biographer; art and fashion historian Françoise Tetart-Vittu; and Philippe Thiebaut, curator and scientific advisor at the Institut National d’Histoire de l’Art (INHA). Subjects discussed included fashion and literature; fashion in Impressionist art; and fashion, sex and gender. These and other public programs were, as always, free to the public. There is a catalog in French published by the Palais Galliera, titled La Mode retrouvée, with essays by Saillard, Steele, and others. An English-language brochure by Steele is also available.
Proust’s Muse, The Countess Greffulhe was the first of several exhibitions focusing on French fashion held at The Museum at FIT. It is followed by Paris Refashioned, 1957-1968 (February 10, –April 15, 2017), curated by Colleen Hill, and Paris, Capital of Fashion (September 2019–January 2020), curated by Dr. Valerie Steele. The exhibition is part of Tandem Paris NYC.
Proust’s Muse, The Countess Greffulhe was made possible thanks to the generosity of the Couture Council with additional support from The Coby Foundation, Ltd.

This exhibition was developed by the Palais Galliera, Fashion Museum of the City of Paris, Paris Musées.