Home /  The Museum at FIT /  Exhibitions /  Uniformity
In this section

We encounter uniforms everywhere — on soldiers, school children, flight attendants, and fast-food clerks. According to fashion historian Jennifer Craik, the omnipresence of uniforms has “shaped our ways of seeing.” Uniforms are constant reminders of the social order, so commonplace that they are often overlooked. Designed both to blend in and to stand out, uniforms play a unique role in our daily lives.

In some ways, they are the antithesis of high fashion. While uniform design focuses on functionality, control, and tradition, fashion design promotes constant change, creativity, and subversion. Yet throughout history, fashion has drawn inspiration from uniforms of all kinds. For example, fashion designers often take functional features and transform them into decorative elements. 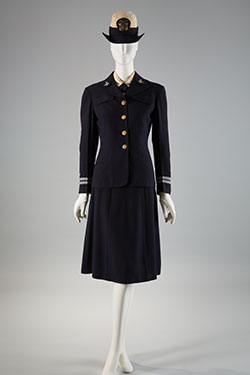 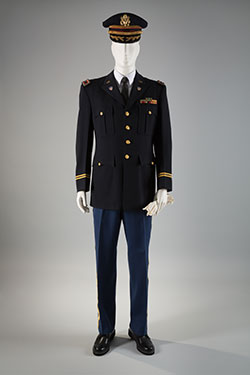 U.S. Army colonel Dress Blue uniform, 1950, wool, USA, gift from the heirs of Teresa Lambert Ireland, 95.102.2
Uniformity explored the dynamic history behind a variety of uniforms, considering their social role and their influence on high fashion. The exhibition was organized thematically to focus on four categories of uniforms: military, work, school, and sports. Within each category, historic uniforms were juxtaposed with the high fashion looks they have inspired.

Military uniforms are referenced in high fashion more often than any other type of uniform. Designers often borrow elements such as metallic braiding, gold buttons, epaulettes, camouflage, and Breton stripes—features that were originally employed to convey a soldier’s nation, rank, regiment, or branch of the armed forces. The translation of military details into high fashion ornamentation flourished during the nineteenth century. Ornate soutache found its way onto women’s outerwear, and by the end of the century, sailor, or “middy,” collars had become fixtures of women’s daywear. Since then, designers such as Chanel, Claire McCardell, Rei Kawakubo, Jean Paul Gaultier, and Sacai have expanded on the trend by constantly drawing on uniforms in their work. 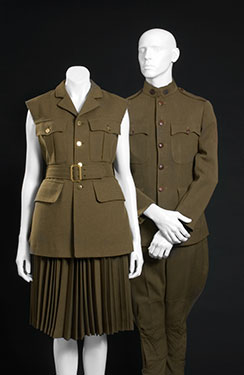 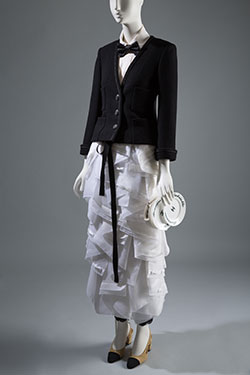 Chanel, “Brasserie Gabrielle” ensemble, fall 2015, wool, silk, cotton, leather, France, gift of Chanel, 2015.64.1
To a certain degree, the adoption of military elements for use in (predominantly female) fashion subverts the hyper-masculine authority of the uniform itself. The power and strength of the uniform fuses with the “feminine” fluidity of fashion, resulting in a garment that is transgressive in its dichotomy. It is both at odds with the original uniform and visually similar to it, which creates an intriguing aesthetic tension.

Work uniforms are designed to make employees of different occupations immediately identifiable. To do this, uniform designers utilize easily recognizable devices. Nurse uniforms, for example, have historically included a distinctive cap and bright white aprons or smocks worn over a standardized dress of blue, pink, white, or grey. McDonald’s uniforms, on the other hand, utilize the distinctive colors and symbols of the company logo to transform each employee into an extension of the company’s branding. While work uniforms have not had as much impact as military uniforms, they too have inspired fashion designers. One example of this is a look from Chanel’s fall 2015 collection that plays on the uniforms of Parisian waiters, complete with a clutch bag that mimics the look of plates. 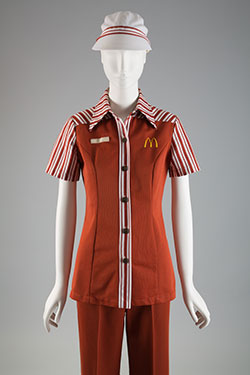 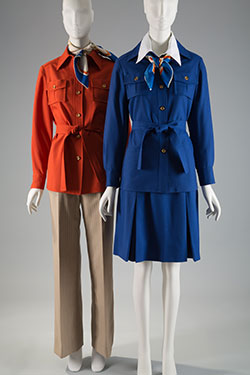 Stan Herman, TWA flight attendant uniforms, 1975, synthetic blend, USA, gift of Stan Herman, 2016.3.1–2
School uniforms hold a special significance for many wearers. Worn during childhood and adolescence, a school uniform—or more accurately, a person’s reaction to a school uniform—can have a marked impact on that person’s attitude towards dress and even his or her own identity. Many designers have experimented with the signature elements of the school uniform, from blazers to pleated skirts. Thom Browne, for example, often combines the iconography of the school blazer with a traditional grey flannel suit, thus fusing adolescent and adult dress codes in a single look. Likewise, a Rudi Gernreich homage to a schoolgirl uniform from 1967 demonstrates that the style became increasingly sexualized during the second half of the twentieth century. 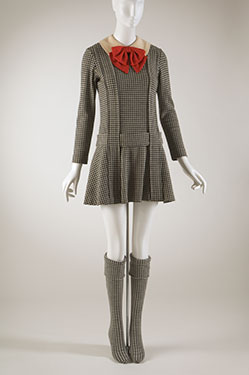 Princeton University blazer, 1944, wool, USA, museum purchase, 2012.2.1
Athletic uniforms sometimes borrow elements from military uniforms. Color contrasts, bold stripes, and soutache braiding help to convey a sense of power and strength. Athletic jerseys distinguish a team from its competitors, and also unite its members as a cohesive group. However, individual numbers help to maintain a level of individuality within a team. The bold insignias and markings of athletic jerseys have influenced the logo-driven branding of many luxury fashion labels. Companies such as Gucci will often place their company names or logos where a team name, player number, or mascot might appear on the front, back, or even sleeve of an athletic uniform. 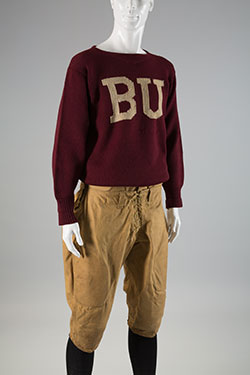 Geoffrey Beene, “football jersey” dress, fall 1967, silk and sequins, USA, museum purchase, 2015.77.3
The push-pull between the identity of a group and that of an individual is a constant tension in modern society. Fashion critic Suzy Menkes once said, “The way that people dress makes them part of an army, dressed in their own uniform, determined to do something.” Although we may not each wear an official uniform in our everyday lives, the influence of uniforms can always be felt, even in the basic activity of getting dressed each morning.

Uniformity was organized by Emma McClendon, assistant curator of costume at The Museum at FIT.
©