Home /  The Museum at FIT /  Exhibitions /  Trend-ology
In this section

Fashion trends are constantly changing. A single shift in print, color, material, embellishment, or silhouette may quickly become a major new trend. Yet while the contemporary fashion press tirelessly reports the latest trend news, it offers scant insight into where trends originate. Utilizing 100 objects from the museum’s permanent collection, Trend-ology examines the diverse sources from which fashion trends have emerged over the past 250 years, including urban street style, art, music, film, and socio-political movements. The exhibition also highlights industry developments that have had an impact on how trends spread.

The exhibition opens with an overview of 21st-century developments in fashion retailing. This includes examples from concept stores such as Opening Ceremony and Colette, as well as high-low collaborations, such as a “Rodarte for Target” sequined dress from 2009. A selection of “It” bags are also on display to illustrate the importance accessories have become to luxury brands. A Louis Vuitton “Speedy 30” bag designed in collaboration with Japanese artist Takashi Murakami is one example. 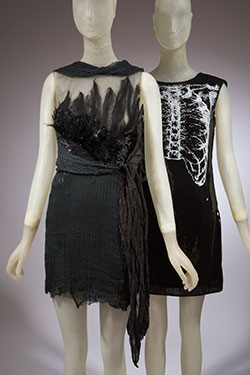 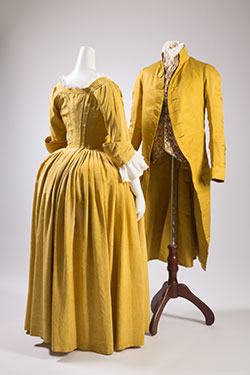 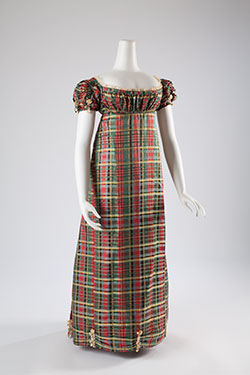 Dress, tartan silk, c. 1812, Scotland, Museum purchase
The exhibition’s historical chronology begins with a pair of 18th-century ensembles that illustrate how the color yellow, once negatively associated with “heretics,” became a trend in 18th-century dress. This was related to the growing popularity of Chinoiserie in Europe. In China, yellow was an auspicious color associated with the Emperor.

The industrial revolution of the 19th century led to certain capitalist developments that altered the ways trends propagate. The department store, for example, offered clients one-stop shopping for a a variety of goods at a faster turnover rate of stock than ever before, thus speeding up the pace of the trend cycle. Also, through the innovation of mail-order catalogs, department stores began marketing trendy items to a wider demographic of consumers. 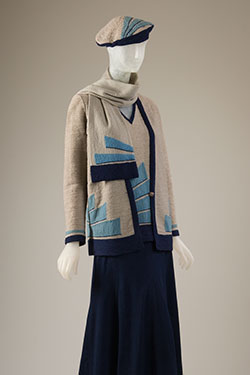 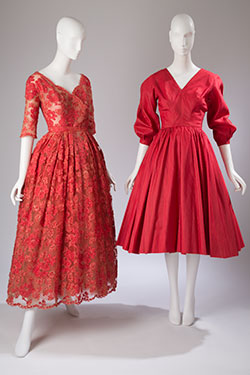 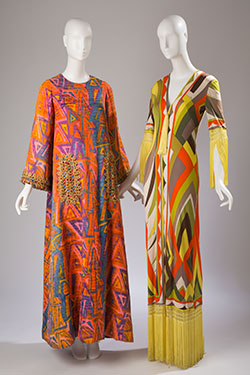 (left) Oscar de la Renta, caftan, multi colored caftan with beaded trim, c. 1963, USA, gift of Diana Vreeland. (right) Emilio Pucci, dress, printed silk jersey, c. 1970, Italy, Gift of Robert Wells in Memory of Lisa Kirk.
During the 1920s, Jean Patou and Gabrielle Chanel designed chic, knit ensembles for their French clients, thus ushering in a trend for knitwear. This relaxed material was ideal for the new, active woman, who might be playing a round of tennis or walking around the city, shopping. During the 1930s, glamorous, bias-cut dresses seen in both Hollywood films and couture collections became a significant trend.

During the 1960s, the boom in commercial air travel enabled socialites, fashion photographers, and designers alike to visit far-off locations more easily than ever before. As a result, exoticism re-emerged. Brightly colored kaftans from Emilio Pucci and Oscar de la Renta became wardrobe essentials among the jet-set. 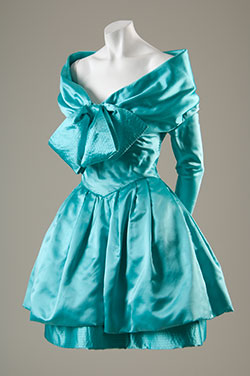 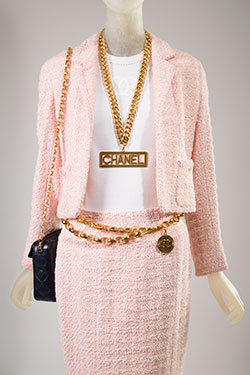 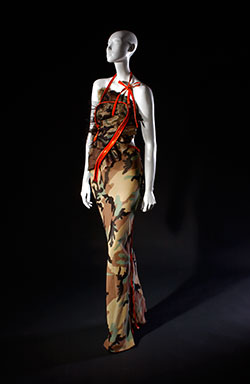 As we move further into the 20th century, fashion trends emerge and spread in faster and more complex ways than ever before. The advent of fast-fashion, the internet, and social media has expanded the global environment. The dynamic pace of the current trend cycle has led the New York Times to ask, “Freedom of Choice: Are Trends Passé?” However, fashion forecasting companies have made researching and predicting trends a profitable business, proving that distinct styles continue to emerge and fade. Fashion designer Jean Paul Gaultier aptly points out that “designers are the catalysts of their time; their role is to translate the changes, the mutations, the evolution of society.” As culture continues to evolve, so, too, do trends in fashion.
Trend-ology was organized by Emma McClendon and Ariele Elia.

For more info about the exhibition, read the press release.
©