Home /  The Museum at FIT /  Exhibitions /  Exposed: A History of Lingerie
In this section

Exposed: A History of Lingerie

As the final barrier to the nude body, lingerie is simultaneously modest and erotic, and it remains a subject of enduring fascination. The design of lingerie enhances its allure: it strategically reveals, conceals, and highlights the wearers form. As French lingerie designer Chantal Thomass observed, The essence and attitude of lingerie is all in suggestion.
Exposed: A History of Lingerie traced developments in intimate apparel from the 18th century to the present. There are two types of lingerie, hard and soft. Hard lingerie includes corsets, bustles, and structured bras, while soft lingerie consists of unstructured garments, such as slips, nightgowns, and panties. As the relationship between dress and the body has been redefined over time, so too have the function and appearance of lingerie. 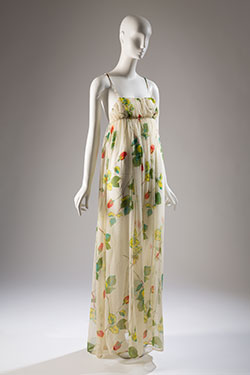 Claire McCardell evening dress, printed nylon, 1950, USA, gift of Mr. and Mrs. Adrian McCardell, 72.61.182.
The concept of underwear-as-outerwear is most commonly associated with the 1980s, but the look of lingerie has long served as inspiration for fashion garments. Exposed opened with several pairings of objects that underscore that connection. A nylon nightgown by lingerie label Iris was shown alongside an evening gown by Claire McCardell, created in a similar fabric and silhouette. Both date from the 1950s. 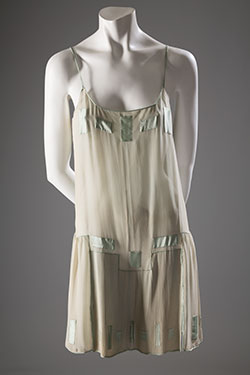 Saks Fifth Avenue camiknickers, crepe chiffon, silk satin, c. 1924, France, Museum purchase, P86.63.5.
The exhibition continued chronologically. A corset from circa 1770, made from sky blue silk, was the earliest object on view. While corsets were essential to maintaining both a woman's figure and her modesty, they also held an erotic allure. Many 19th-century undergarments were characterized by their modest designs and humble materials, but by the early 20th century, intimate apparel was often as beautiful and seductive as it was functional, a concept that was epitomized by colorful petticoats and opulent tea gowns. Meanwhile, many styles of underclothing were becoming more streamlined, corresponding to the slimmer silhouettes of outer garments. Elasticized girdles had replaced constricting corsets by the 1920s, while bras, slips, and even lounging apparel also took new, modern forms. 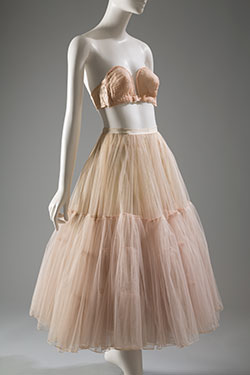 Suki Cohen (Sarah Cohen) bodysuit and bolero jacket, stretch nylon, neoprene, 2014, Columbia, gift of Suki Cohen, 2014.11.1 & 2014.11.2.
During the 1950s, the return of the hourglass silhouette demanded more rigid foundation garments, such as corsets and stiff tulle petticoats. These styles were directly contrasted in the following decade, when unstructured lingerie in featherweight fabrics was worn to complement revealing, youth-driven clothing styles. The 1980s saw a return to luxurious undergarments, such as lacy teddies and provocative bustiers, which were often inspired by designs of the past. While sexy, high-end labels such as Agent Provocateur and La Perla thrive in the 21st century, the expanding lingerie market offers styles for every woman, from classic to fashion-forward, comfortable to overtly seductive.
Exposed: A History of Lingerie was organized by Colleen Hill, associate curator at The Museum at FIT. A book accompanying the exhibition is available from Yale University Press, and features over 70 full-color photos of objects featured in the exhibition.

For more info about the exhibition, read the press release.