Home /  The Museum at FIT /  Exhibitions /  RetroSpective
In this section

Even a cursory examination of contemporary design reveals a strong tendency to borrow from the past. Yet, the reinterpretation of historical silhouettes or details is far from a modern phenomenon. Women of the early 1910s wore gowns that drew on popular fashions a century earlier, for example, and women in the midst of a Victoriana craze in the 1930s found that dresses with gigot sleeves, crinolines, and bustles were once again fashionable. RetroSpective examined fashions fascination with its own history by presenting an overview of historical references in fashion, paying particular attention to recurrence of silhouette. 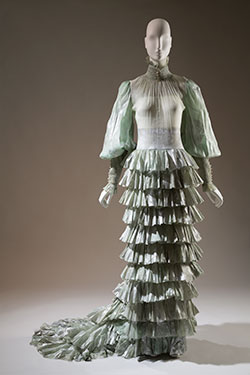 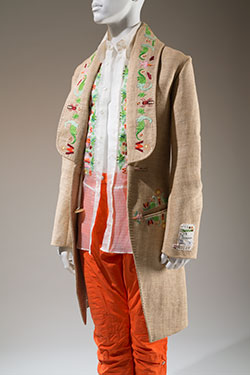 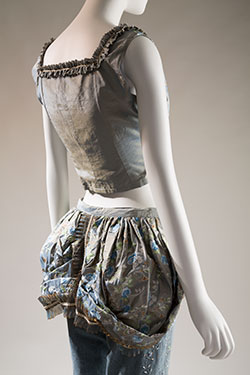 The remainder of the exhibition explored groupings of period fashions and their more recent reincarnations, spanning 250 years of fashion, beginning with the 18th century. A 2006 raffia suit by Walter Van Beirendonck was paired with the type of elaborate 18th-century menswear that inspired its shape and decoration. Women's wear examples looked at recurrences of the 18th-century pannier silhouette, which was revived as early as the 1920s in the form of dresses called robe de styles.

The large gigot sleeves that were fashionable in the 1830s and 1890s have also made numerous resurgences in fashion. Yves Saint Laurent displayed them on his lavish evening dress from circa 1980, creating an effect almost identical to the sleeves on a green silk 1830s dress with which it was juxtaposed. 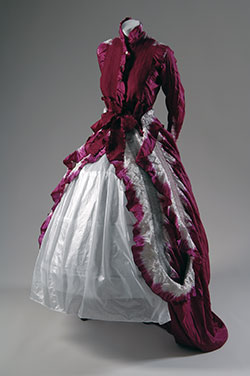 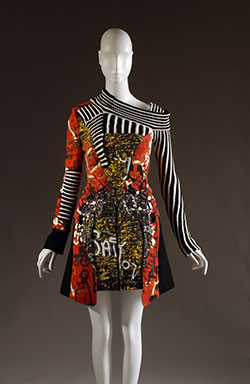 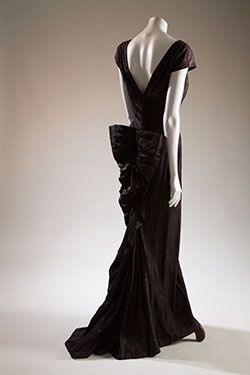 Elsa Schiaparelli, evening dress, black and bronze shot silk taffeta, circa 1939, France, courtesy of Mrs. Michael Blankfort.
Petticoats and metal-hooped cage crinolines were two ways in which mid-19th-century women supported the expansive skirts then in fashion. About a century later, the eras dominant silhouette, an hourglass, was once again desirable in fashion. The trend for small waists and full skirts was illustrated by a cocktail dress, circa 1950, from Anne Fogarty, who favored the wearing of layers of petticoats. Japanese designer Yoshiki Hishinuma blended East and West with his nod to mid-19th-century fashion, and Olivier Theyskens for Rochas used the elements of crinoline undergarments as exterior design features.

Of late, revivals seem to have quickened pace. In the book Retro: The Culture of Revival, design scholar Elizabeth Guffey observed that since World War II, there has been a popular thirst for recovery of earlier, and yet still modern, periods at an ever-accelerating rate. Illustrative of this phenomenon was a Nicolas Ghesquire dress for the house of Balenciaga from fall 2004 which makes reference to fashions of only two decades earlier. Most recently, the recurrence of grunge, which originated in the early 1990s, has prompted renewed interest in the cycles of revival.

The past, whether far removed or only decades ago, continues to fascinate scholars, students, and designers. Historical silhouettes and details provide rich territory for reinterpretation and even innovation. Cutting-edge designer Yohji Yamamotoun, abashed in his love of the history of couture fashions, once said that going to the future means you have to use your past. His work, and that of the other designers featured in RetroSpective, demonstrated that repeating history is an integral part not only of fashions past, but also its future.

RetroSpective was organized by Jennifer Farley, with textiles by Lynn Weidner and accessories by Colleen Hill. All objects in the exhibition were from The Museum at FIT's collection.
©