The Museum at FIT honored Wes Gordon, creative director of Carolina Herrera, with its 2021 Couture Council Award for Artistry of Fashion, presented at a luncheon on Wednesday, September 22 at Cipriani South Street in New York City. The annual event benefited the recently reopened Museum at FIT (MFIT), New York’s only museum dedicated exclusively to the art of fashion, which was temporarily closed due to COVID-19. The presenting sponsor was NORDSTROM and the co-chairs were Jeffery Fowler, president, Americas at Farfetch and Couture Council vice chair, and Émilie Rubinfeld, president of Carolina Herrera and Couture Council board member.

Gordon, who previously received the Fashion Group International’s Rising Star Award and was a finalist for the CFDA/Vogue Fashion Fund, began consulting for Carolina Herrera in March 2017 and was quickly appointed creative director the following year. Since then, he has helped reimagine the timeless brand by incorporating vibrant and playful themes throughout the designs. Carolina Herrera is celebrating its 40th anniversary with a campaign led by Gordon centered around the place that he and the brand call home, New York City.

“I am honored to be recognized with this year’s Couture Council Award for Artistry of Fashion. This recognition, combined with the reemergence of New York Fashion Week and Carolina Herrera’s ongoing 40th anniversary celebration, is going to make this fall one to never forget,” said Gordon.

“We are pleased and honored to recognize Wes Gordon,” said Dr. Joyce F. Brown, president of FIT. “His achievements in fashion are outstanding and he is a wonderful role model for emerging designers, including our own students. We look forward to celebrating his accomplishments and being part of New York City’s fashion reawakening at the Couture Council luncheon next month.”

“As we emerge from a uniquely difficult period, we are happy to celebrate the reawakening of New York fashion,” says Dr. Valerie Steele, director and chief curator of The Museum at FIT. “Wes stays true to the heritage of Carolina Herrera, while adding his own joyful flair.” 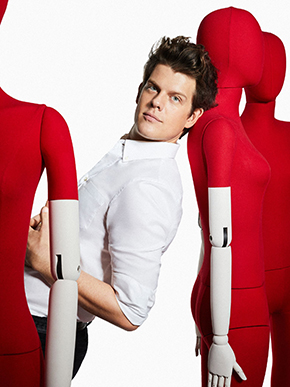 Wes Gordon serves as the Creative Director of Carolina Herrera New York. Appointed by the brand’s founder, Carolina Herrera, Wes leads the global creative strategy of the label across all brand platforms including ready-to-wear, bridal and eyewear.
Raised in Atlanta, Wes attended Central Saint Martins College of Arts and Design in London. Upon graduation in 2009, the designer moved to New York City to launch his eponymous line of womenswear and presented his collection in New York from 2010 to 2016. During this time, Gordon received the Fashion Group International’s Rising Star Award and was a finalist for the CFDA/Vogue Fashion Fund.
In March 2017, Wes began consulting with Carolina Herrera before being appointed Creative Director in 2018. His first runway show for the House was Spring 2019, which was presented on September 10th, 2018 in New York City.

At Nordstrom, Inc. (NYSE: JWN), we exist to help our customers feel good and look their best. Since starting as a shoe store in 1901, how to best serve customers has been at the center of every decision we make. This heritage of service is the foundation we’re building on as we provide convenience and true connection for our customers. Our digital-first platform enables us to serve customers when, where and how they want to shop – whether that’s in store at more than 350 Nordstrom, Nordstrom Local and Nordstrom Rack locations or digitally through our Nordstrom and Rack apps and websites. Through it all, we remain committed to leaving the world better than we found it.

Carolina Herrera is a New York-based fashion house recognized globally for creating beautifully crafted collections synonymous for being fearless and fabulous. Founded in 1981 by Carolina Herrera, the brand encompasses a profile of luxury ready-to-wear, bridal, fragrance, beauty and eyewear, as well as accessories for women, men and children. Today, the brand is available worldwide in over 15,000 points of distribution, including over 350 CH Carolina Herrera and 3 Carolina Herrera New York retail locations. Carolina Herrera is part of Puig, a third-generation, family-owned fashion and fragrance business based in Barcelona, Spain. In 2018, Carolina Herrera announced her new role of Global Ambassador and appointed Wes Gordon as the Creative Director, leading design and artistic direction for the brand.