On Wednesday, September 9, 2009 The Couture Council of The Museum at FIT honored Dries van Noten with the 2009 Couture Council Award for Artistry of Fashion at their fourth benefit luncheon at New York City's Cipriani 42 Street. The FIT Couture Councils glamorous annual luncheon is the first event of the New York's Fall Fashion Week.

Previous recipients of the Couture Council Artistry of Fashion Award have been Isabel Toledo in 2008 (a prescient choice made before Mrs. Obama selected her for her Inaugural outfit), Alber Elbaz of Lanvin in 2007, and Ralph Rucci, the recipient of the first award in 2006. Recipients of the Award are chosen by the Couture Council Advisory Committee, an independent group consisting of curators, editors, and retailers. Members include Pamela Golbin, curator of the Muse de la Mode, Akiko Fukai, director and chief curator of the Kyoto Costume Institute, Glenda Bailey, editor-in-chief of Harpers Bazaar, Hamish Bowles, editor of Vogue, Ken Downing of Neiman Marcus, Linda Fargo of Bergdorf Goodman, Julie Gilhart of Barneys New York, and others. The group is chaired by Dr. Valerie Steele, director and chief curator of The Museum at FIT.

Dries van Noten creates clothes of extraordinary beauty and originality, says Steele. His sense of color, print and decoration are unequaled. Dries clothes are not for one season. Like works of art, they continue to speak to us across time and space. He has created a unique personal signature, but at the same time, he facilitates the wearers individual sense of style. 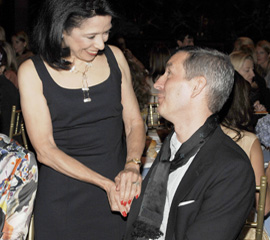