Home /  The Museum at FIT /  Exhibitions /  A Queer History of Fashion: From the Closet to the Catwalk
In this section

A Queer History of Fashion: From the Closet to the Catwalk

Visit the online exhibition and the Facebook page for A Queer History of Fashion.
A Queer History of Fashion: From the Closet to the Catwalk featured approximately 100 ensembles, from 18th-century menswear styles associated with an emerging gay subculture to 21st-century high fashion. This was the first museum exhibition to explore in depth the significant contributions to fashion made by LGBTQ (lesbian-gay-bisexual-transgender-queer) individuals over the past 300 years and won three significant awards. The exhibition won the 2013 Award of Merit from the Museum Association of New York, the website won a silver MUSE award (2014) from the American Alliance of Museums, and the publication won the 2014 Millia Davenport Award from the Costume Society of America. 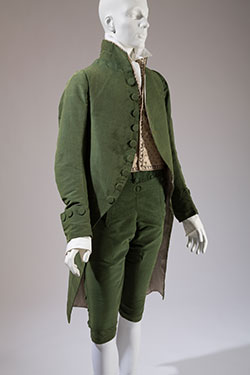 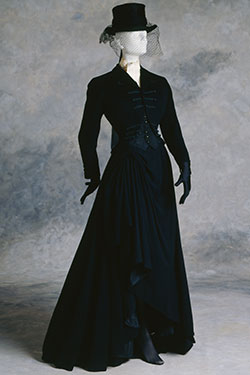 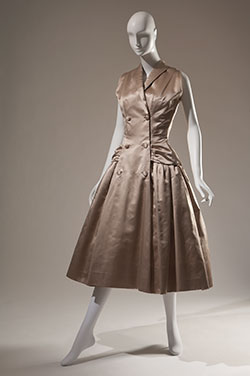 Christian Dior, dress in champagne silk satin, 1954, France. Gift of Sally Cary Iselin, 71.213.20.
Exhibition curators Fred Dennis, senior curator of costume, and Valerie Steele, director and chief curator of The Museum at FIT, spent two years researching and curating the exhibition. They worked with an advisory committee of eminent scholars, including professors George Chauncey (author of Gay New York), Shaun Cole (author of Don We Now Our Gay Apparel), Jonathan Katz (author/curator of Hide and Seek), Peter McNeil (co-editor of The Men’s Fashion Reader), and Vicki Karaminas (co-editor of the forthcoming Queer Style), as well as FIT faculty and fashion professionals.
“This is about honoring the gay and lesbian designers of the past and present,” said Dennis. “By acknowledging their contributions to fashion, we want to encourage people to embrace diversity.”
“We also hope that this exhibition will transform our understanding of fashion history,” added Steele. “For many years, gays and lesbians were hidden from history. By acknowledging the historic influence of gay designers, and by emphasizing the important role that fashion and style have played within the LGBTQ community, we see how central gay culture has been to the creation of modern fashion.” 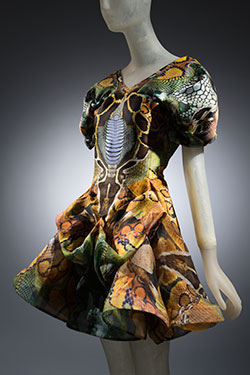 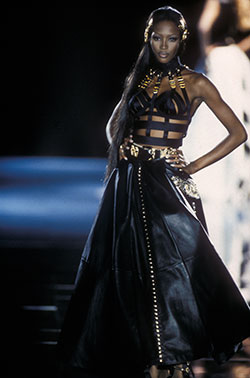 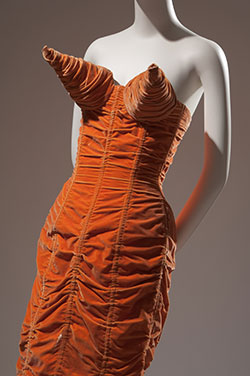 Jean Paul Gaultier, shirred orange velvet dress with cone bust, 1984, France. Museum purchase, P92.8.1.
From Cristobal Balenciaga and Christian Dior to Yves Saint Laurent and Alexander McQueen, many of the greatest fashion designers of the past century have been gay. Organized in roughly chronological order, the exhibition explored the history of modern fashion through the lens of gay and lesbian life and culture, addressing subjects including androgyny, dandyism, idealizing and transgressive aesthetic styles, and the influence of subcultural and street styles, including drag, leather, and uniforms.
The exhibition traced how the gay vernacular styles changed after Stonewall, becoming increasingly “butch.” Lesbian style also evolved, moving from the “butch-femme” paradigm toward an androgynous, anti-fashion look, which was, in turn, followed by various diversified styles that often referenced subcultures like punk.
The AIDS crisis marked a pivotal mid-point in the exhibition. Clothing by a number of designers who died of AIDS, including Perry Ellis, Halston, and Bill Robinson, were featured, as will a wide range of activist T-shirts for ACT UP, Queer Nation, the Lesbian and Gay Rights March in Washington and the iconic Read My Lips. Emphasizing that gay rights are human rights, the exhibition concluded with a section on gay wedding fashions as the sartorial expression of the issue of marriage equality. 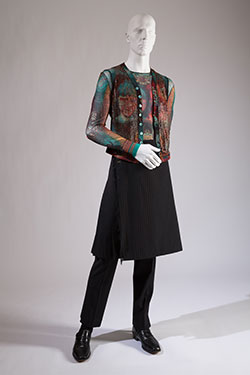 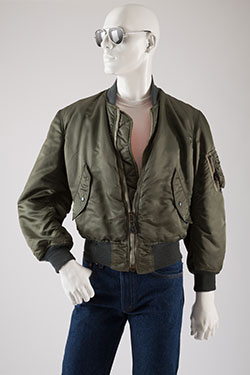 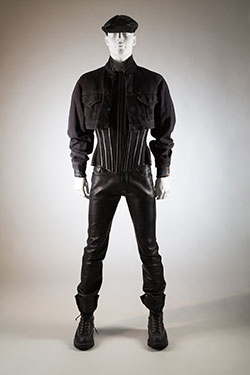 This exhibition has been made possible thanks to the generosity of: