Home /  The Museum at FIT /  Exhibitions /  Elegance in an Age of Crisis: Fashions of the 1930s
In this section

Elegance in an Age of Crisis: Fashions of the 1930s

Visit the online exhibition for videos, social media, and more, read the exhibition blog for special insights and behind-the-scenes interviews, or watch the His and Hers videos!

Many view the 1930s – a decade that emerged from the Jazz Age and ended with the onset of World War II – as the period in which truly modern clothing was created. As the rise of classicism became a dominate force in art and design, a balanced and well-proportioned body became the fashion ideal. The structure and rigidity of the Edwardian era and the shapeless styles of the 1920s were replaced by fashions that enhanced the human form without restricting it. Born of innovation and traditional craftsmanship, the phenomenon of modern and elegant dressing occurred in the realms of both women’s high fashion and men’s bespoke tailoring, as well as their respective accessories. 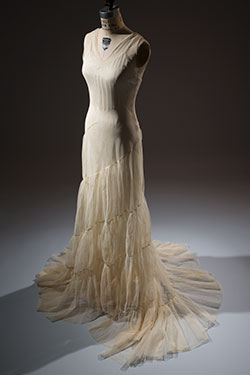 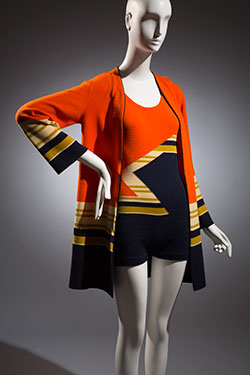 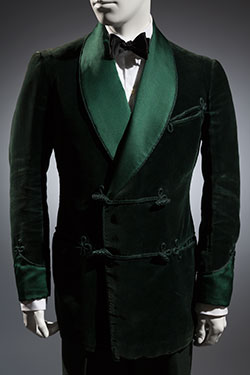 Gardner and Wooley LTD smoking jacket, green velvet, satin, 1936, London. Collection of Alan Bennett, Davies and Son.
Although the 1930s is not a new topic to fashion historians and curators, past exhibitions were high glamour presentations, but they overlooked the richness of menswear. They also overlooked the global impact of fashions created outside of Paris, the epicenter of haute couture. Elegance in an Age of Crisis featured a balanced view of both women’s high fashion and menswear. The perspective was global: with objects from Paris and London (capitals of haute couture and bespoke tailoring respectively), as well as cities such as Naples, New York, Los Angeles, Havana, and Shanghai.

It is a compelling irony that the elegant and progressive qualities of 1930s fashions emerged during one of the most tumultuous periods of modern western history. Set between the stock market crash in 1929 and the outbreak of war in Europe in 1939, this decade was a startling paradox, as the title of this exhibition suggests. From 1914 to 1945, the world was embroiled in two horrific world wars, with a soul-searing, catastrophic economic depression separating them. Yet despite these crises—or maybe in reaction to them—culture during the Great Depression was not only elegant, but also buoyant, effervescent, and escapist. 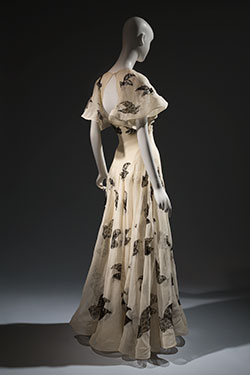 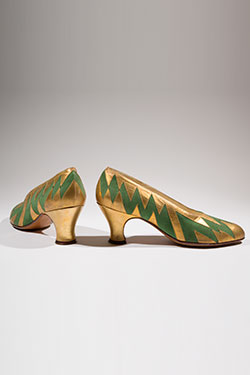 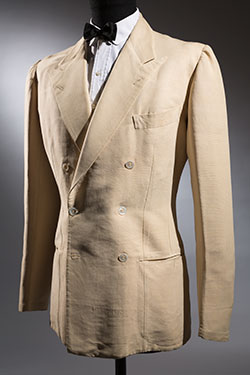 London House (founder: Gennaro Rubinacci, tailor: Vincenzo Attolini) classic Neapolitan jacket, silk thussor, 1930s, Italy. Lent by the Rubinnaci Museum.
Along with the classical revival, influences that led to a new, modern style of clothing were advances in textile technology and a strong reliance on craftsmanship. Inspired by the bourgeoning, streamlined aesthetic and enriched by the growth of softer materials, innovative tailors and dressmakers began to construct clothing without padding and boning. By draping soft crepes on the bias (or oblique angle), Madeline Vionnet, one of the greatest dressmakers of the twentieth century, inspired a cadre of couturiers who revolutionized fashion and literally built the languid styles of the age. Those in Vionnet’s sphere of influence included Alix Grès, Augustabernard, and Louiseboulanger in Paris; Elizabeth Hawes, Valentina, Claire McCardell, and Jo Copeland in New York; and costumiers in Hollywood, such as Adrian.

For menswear, the Neapolitan dandy-turned-purveyor, Gennaro Rubinacci and his master tailor, Vincenzo Attolini, literally “deconstructed” the suit and created a garment as supple as a shirt, while in London, Frederick Scholte softened British tailoring with the creation of the London Lounge style as he pioneered the celebrated drape cut. Farther afield, Chinese women in Shanghai created a truly modern garment—the qipao. Part traditional Qing Dynasty banner gown, part high fashion dress, the qipao became the standard garment for Chinese women around the world. 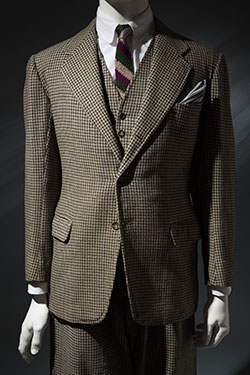 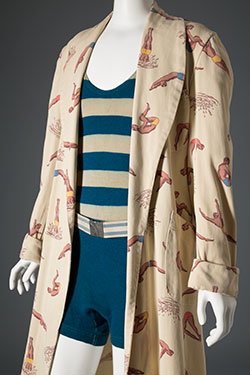 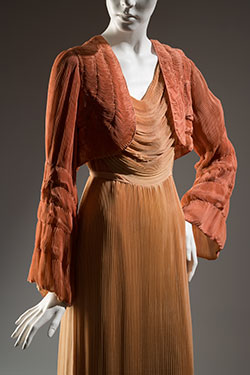 Hélène Yrande negligee ensemble, coral and peach pleated silk chiffon, 1932, France. Gift of Sophie Gimbel, 75.69.9.
Also highlighted in the exhibition were a range of occasion-specific garments that were produced with increasing variety and innovation during the 1930s. Daytime suits for women became standard. Tweed, no longer only for certain sports, became a ubiquitous material for menswear. The spectrum of outfits for activities such as skiing, golf, and body-revealing swimwear expanded, mirroring the growth in technology that made sports clothes lighter and more functional. Lingerie and at-home ensembles mirrored the decade’s sensuous evening gowns and suits, and resort dressing designed specifically for warm weather environments grew in significance.

Objects featured in the exhibition epitomized the streamlined aesthetics of this golden age of fashion. From neckline to hemline and every nuanced detail in between, Elegance in an Age of Crisis paid homage to the great men and women, craftspeople and clients alike, who created styles that live on to this day as the ideal of beauty and modernity.

For additional specifics about the exhibition, read the press release.

This exhibition was made possible thanks to the generosity of: