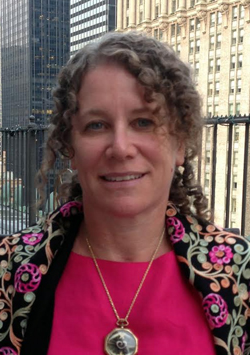 Amy Werbel joined the department in 2013 as a specialist in art of the United States. She is the author of numerous works on the subject of American visual culture and sexuality, including Lust on Trial: Censorship and the Rise of American Obscenity in the Age of Anthony Comstock (Columbia University Press, 2018), winner of the 2019 Peter C. Rollins Book Prize of the Northeast Popular and American Culture Association. Lust on Trial has been praised in the Times Literary Supplement as "richly detailed, deeply researched, and lavishly illustrated," and in the Los Angeles Review of Books as "an amazing feat of pop-cultural scholarship." Werbel's previous publications include Thomas Eakins: Art, Medicine, and Sexuality in Nineteenth-Century Philadelphia (Yale University Press, 2007), which was designated an “Outstanding Academic Title” by Choice magazine and praised in The New England Journal of Medicine as “a rigorous academic review that is readable and enjoyable.”

Dr. Werbel is the recipient of fellowships and scholarships from numerous institutions, including the Frick Center for the History of Collecting, Smithsonian American Art Museum, Gilder Lehrman Institute of American History, and Metropolitan Museum of Art. She served as a Fulbright Scholar for 2011-2012 at Guangdong University of Foreign Studies in Guangzhou, China, where she taught American studies and art history courses to graduate and undergraduate students, and lectured throughout the mainland on topics including censorship. Her self-published book, Lessons from China: America in the Hearts and Minds of the World’s Most Important Rising Generation (2013), reflects on these cross-cultural experiences. She was honored to receive the 2018-2019 State University of New York Chancellor's Award for Excellence in Scholarship.

Lust on Trial: Censorship and the Rise of American Obscenity in the Age of Anthony Comstock (New York: Columbia University Press,  2018). Read reviews.

Lessons from China: America in the Hearts and Minds of the Worlds Most Important Rising Generation (Self-published. Printed by CreateSpace, 2013).

“Should She Stay or Should She Go?The uplifting, but ultimately cynical saga of Fearless Girl” 3rd Dimension (January 08, 2018).

“Imagining the Future of Monuments to the Confederacy,”Sculpture Review 357 (Winter 2017).

“Lifting the Lid on Cigar Boxes at Winterthur”Panorama: Journal of the Association of Historians of American Art 2.2 (Fall, 2016).

"'The Crime of the Nude:' Anthony Comstock's Raid on the Art Students League of New York and the Origins of Modern American Obscenity" Winterthur Portfolio 48, no. 4 (Winter, 2014): 249-282

Book Review. An Eakins Masterpiece Restored: Seeing The Gross Clinic Anew, edited by Kathleen A. Foster and Mark S. Tucker (Philadelphia Museum of Art, 2012). In The Pennsylvania Magazine of History and Biography 138 (April, 2014): 224-226.

“Censorship, Social Control, and the Nude in 19th century Britain vs. the United States,” University of York, Department of the History of Art Research Seminar, February 27, 2020.

“Censorship and Obscenity in Law and Culture,” Institute of Art and Law, York, UK, February 22, 2020.

“Obscenity in Law and Culture in the Age of Anthony Comstock,” University of New Hampshire School of Law, The Franklin Pierce Center for Intellectual Property, March 27, 2019

“From Charles Willson Peale to Robert Mapplethorpe: Philadelphia on the Front Lines in the Fight for Artistic Freedom,” Pennsylvania Academy of the Fine Arts, March 6, 2019

“The Quagmire of Government Censorship Efforts in the Age of Anthony Comstock” Archer Center, The University of Texas System in Washington, D.C., November 14, 2018.

“The Past, Present, and Future of American Free Speech: A Conversation with Nadine Strossen and Daniel Levinson-Wilk,” Fashion Institute of Technology, Katie Murphy Amphitheater, October 23, 2018.