Home /  School of Graduate Studies /  Research
In this section

Research in the Real World

The School of Graduate Studies brings together artists, designers and business professionals who thrive on the most current research. Our community responds with a broad spectrum of cutting-edge inquiry and analysis. Our students have extraordinary resources available to them both at the Fashion Institute of Technology and in New York City.

Please note, the International Visiting Scholar program formerly publicized on this page has been suspended for the academic yea due to other commitments. When it is possible to reinstitute this program and receive applications, an announcement will be posted on this page.

The Haas-Lilienthal House, a pristine 1886 Victorian mansion with most of its contents intact, was designed by renowned Victorian architect Peter Schmidt, for members of the Haas and Lilienthal families, who were among the city’s most prominent early residents.

Listed in the National Register of Historic Places in 1973, and designated a San Francisco Landmark in 1975, it is an exuberant example of the Queen Anne style. Barbara Campagna developed a Sustainability Management Plan for the house museum whose baseline target was to implement much- needed capital improvement projects while overhauling maintenance and stewardship policies and procedures.

A guiding premise of the Plan was that the House should meet energy and sustainability goals while preserving its character-defining and historically significant features. As a traditional building, the project evaluation was initiated by identifying and leveraging the original design features that contribute to the management of heat, air and light in the building.

Each recommendation was evaluated against whether it could save energy and material resources, while respecting character-defining elements. Recommendations for the strategic approach include steps to be implemented sequentially or in tandem depending on the construction schedule and funding campaign, including capital improvements, phased construction, energy audit, weatherization, development of a green housekeeping program, LEED- based maintenance and operations, major rehabilitation, and Net Zero goals. The project has been presented at major conferences such as the AIA and Greenbuild as an example of sound sustainable preservation management policies using LEED EB O&M.

Dedicated in 1911, the Buffalo Homeopathic Hospital (later Millard Fillmore Hospital) was designed by Boston architect George F. Newton. Many additions were made until 1972, and in 2010, building owners Kaleida Health consolidated operations at Buffalo General Hospital and requested adaptive reuse proposals from the community. Barbara Campagna has been conducting research for the new owner on the history of the site, the history of homeopathy in America and the existing conditions of the buildings and landscape since 2012 in order to develop a new sustainable use for the site which complements its history. She recently submitted a comprehensive National Register of Historic Places nomination for the site to the National Park Service – the first homeopathic hospital site in the country to be researched for the National Register.

Lee H. Nelson Hall was originally constructed in 1923 and designed by the firm Favrot and Livaudais, architects who were responsible for numerous downtown New Orleans buildings, and other public buildings around Louisiana. The structure served as a classroom building and activity center for female physical education students on the campus of what is now Northwestern State University (NSU). Once the Hall was no longer large enough to serve the student body, it was closed, and a new building was completed in 1970.

After 30 years of use as a storage facility, a new National Center for Preservation Technology and Training was created by the National Park Service and located in the building in 2001, “using technology to serve the future of America’s heritage through applied research and professional training.” Barbara Campagna has been developing and managing a Sustainability Management Plan for the building, which includes running eco-charrettes and conducting an energy audit to achieve the following goals of NCPTT:

1. Improve the energy and resource performance of the Lee H. Nelson Hall and decrease the costs of utility bills.

2. Provide training to NCPTT staff, which engages them in the sustainable stewardship decisions for the building and site, and provides experience with LEED EB:O&M and the eco-charrette format.

3. Advance the leadership role of NCPTT in sustainable stewardship and preservation by providing a model project for “greening” the maintenance procedures of NCPTT’s historic building.

Based within the framework of the body of literature in museum and object studies, this research project examined potential areas of confluence between object interpretation and meaning-making in museum practice, with objects as used in therapeutic practice. The purpose was to explore opportunities where object-based therapeutic applications and outcomes could suggest design approaches towards enhanced and healthful visitor engagement in museum environments. The study followed the premise that people have an innate and necessary psychological relationship with objects that I refer to as primal dialogue, and that it serves as a means for understanding why it is that objects are essential in meaning-making and to psychological health.

To explore this premise, object based therapy was determined to be an appropriate and unique arena for study, leading to primary research in the use of objects at an adolescent therapeutic wilderness program and with an educational and mental health consultant expert in the making of objects as a means of self-discovery and actualization. The therapeutic work with objects at each venue correlates with research in the roles and interpretation of objects in museum exhibitions, including objects in relation to sociocultural identification, self identification, power, and humanity. The primary research activities led to the identification of five specific object dynamics in which objects are inherent to an individual’s well-being and psychological health: Unburdening, Giving/ Releasing, Associating, Making, and Composing. The findings suggest methods in which exhibitions can be designed to influence healing experiences for visitors, and an advanced study is being conducted with the September 11th Memorial Museum to further define the object dynamics. 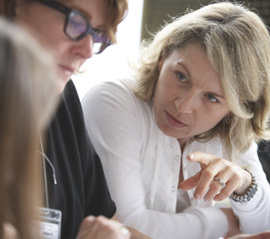