For the second consecutive year, a team of four students in the Jay and Patty Baker School of Business and Technology, representing the United States, has won the Retail Futures Challenge, an international competition that takes place at the annual World Retail Congress. The FIT team, who traveled to Paris for the competition, bested teams from Hong Kong, London, Tokyo, and Marche, Italy, on September 30, with their concept for the Samsung Life Store "The Smart Apartment." 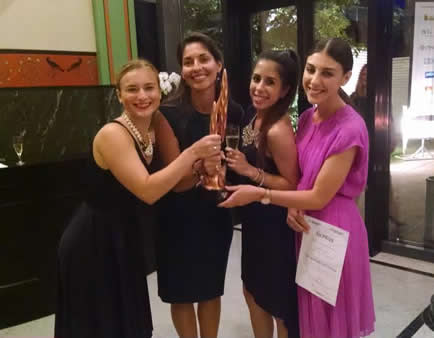 For this years competition, the student teams were challenged to develop a new retail concept for the Samsung Life Store. They had to consider the needs of the millennial consumer in order to understand how the "internet of things"—the connected home, the convergence of products, and changing lifestyles—dictates the look, role, and delivery of a store selling Samsung appliances. Based on this, each team developed a retail store concept that included a basis for their concept, an explanation of the shoppers journey, a business model, and an earnings forecast. Samsung worked closely with the competing teams to advise and mentor the development of their ideas.

Each teams preliminary work had been submitted prior to the competition. Then, the retail concepts were displayed at the World Retail Congress, with teams on hand to discuss their concepts with executives. Finally, the teams made formal presentations to a panel of judges and an audience of retail executives.

"It really says a lot about the students and FIT that we have won this major competition for the second consecutive year," said Robin Sackin, chair, Fashion Merchandising Management, and advisor for the FIT team. "The students gave an exceptional presentation. They worked extremely hard and made all of us at FIT so proud."