Ten second-semester FIT students, who were invited by First Lady Michelle Obama to join her on Monday, May 5 for the ribbon cutting of the newly renovated, and newly named, Anna Wintour Costume Center at the Metropolitan Museum of Art, sat with FIT President Joyce F. Brown and fashion design luminaries at the event. The Met's new $40 million center is named for the editor of Vogue magazine. 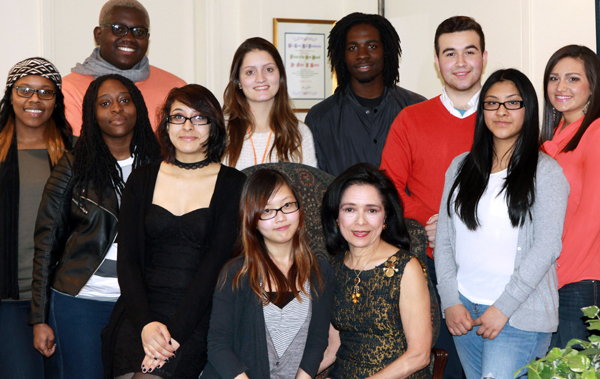 Mrs. Obama noted that the Met will be opening up the world of fashion like never before. She pointed out that many of the hundreds of thousands of visitors to the new space will be students. Maybe they'll come initially because they love clothes and fashion but then will learn fashion is a business, an art, and a career.

"This is for anyone curious about fashion," she said, specifically addressing the students in the audience. "Fashion is a business and an art. You're here because we want you to dream bigger. She added that they have full permission to "fail and fail and fail" until they succeed.

After her remarks, the designers, students, and other guests toured the center's inaugural exhibition, Charles James: Beyond Fashion, which features the work of the influential mid-20th century American couturier.

These students are driven by a passion for their art and a clear vision of their careers. For example, Novoa wants to design accessible fashion for all age groups. Rios hopes to become a children's book illustrator who inspires young readers the way she has been inspired. And Howell finds design inspiration in her Guyanese heritage, specifically the vibrantly colored costumes of Carnival.