The Interior Design department at the Fashion Institute of Technology (FIT) has named Ada Tolla and Giuseppe Lignano, founding partners of LOT-EK, the 2014 recipients of the Lawrence Israel Prize. The prize, endowed by architect Lawrence J. Israel, has been given annually since 1998 to an individual or firm whose ideas and work enrich FIT Interior Design students course of study. Each year, the award recipients are invited to give a public talk at FIT. 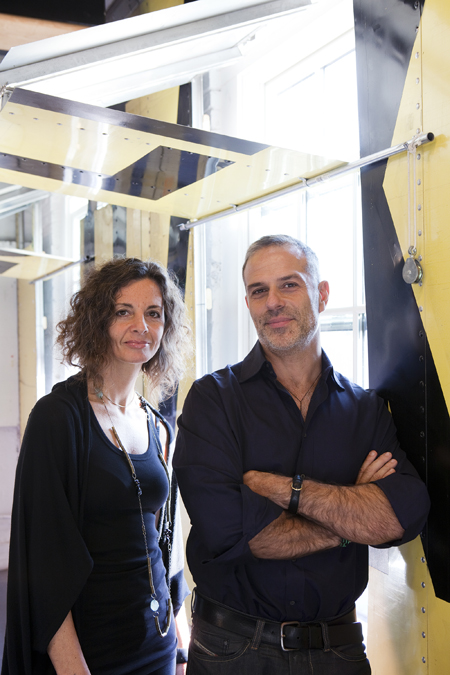 Tolla and Lignano will discuss their work in a talk entitled O+O (Objects and Operations) on Tuesday, April 22 at 6 pm in the Katie Murphy Amphitheatre at FIT, Seventh Avenue at 27 Street. This event is free and open to the public, with no reservations required.

Founded in 1993 by Tolla and Lignano, LOT-EK is an award-winning architectural design studio based in New York and Naples, Italy, that has achieved high visibility for its sustainable and innovative approach to construction, materials, and space through the adaptive reuse (or upcycling) of existing industrial objects and systems not originally intended for architecture. LOT-EKs projects have long been considered groundbreaking and innovative.
In 2011, Tolla and Lignano were recognized as Fellows by United States Artists (USA). Nominations are made each year by an anonymous group consisting of arts leaders, critics, scholars—all selected by USA—of artists they believe show an extraordinary commitment to their craft. Their work can be viewed at lot-ek.com.

The firm has designed and built commercial, institutional, and residential projects globally. In addition, LOT-EK has conceived and executed exhibition design and site-specific installations for major cultural institutions and museums, including the Museum of Modern Art, the Whitney Museum, the Walker Art Center, and the Guggenheim Museum. LOT-EK is the design architect for a large public/commercial development, Super Pier (formerly known as Pier 57), in Manhattans Meatpacking neighborhood. Currently under construction, the development will leverage upcycled shipping containers to create public spaces, as well as multiple commercial and retail spaces (superpier.com). The firm is also designing the first U.S. retail store for fashion brand Band of Outsiders in Soho, and recently submitted plans for a new office building in Minneapolis. Their APAP Open School building was recognized with an AIANY Design Award in 2011.

LOT-EK is committed to ecologically responsible and intelligent methods of building. To that end, the firm leverages the technological properties of existing industrial objects to create architecture. Their goal is not to only recycle objects themselves but to recycle the intelligence that went into the development of those objects. As a result, beyond the inherent sustainability of LOT-EKs design methodology is its commitment to researching and implementing innovative ways to conserve materials and energy.

LOT-EKs first monograph, Urbanscan, was published by Princeton Architectural Press in February 2002. LOT-EK Mixer, was issued by Edizioni Press in 2000, and MDU: Mobile Dwelling Unit, published by DAP, was printed in June 2003.

In selecting this years honorees the selection committee noted that LOT-EK's practice stands as a keen role model for all students of design, particularly the students at FIT. From large-scale architectural works to highly considered interiors, Tolla and Lignano have achieved global notoriety and have always been provocateurs, crafting not just great works but defined new approaches to industrial artifacts to formulate a sustainable mode of operation.

FIT's Interior Design program, named by Design Intelligence as one of the country's top ten interior design programs, by schoolofinteriordesign.org as among the top ten programs in the world, and by Examiner.com as the number one interior design program in New York City, has been preparing students for success for more than 50 years. This rigorous, multidisciplinary program combines the academic study of the history and theory of interior design with practical, hands-on projects. In classes taught by industry professionals, students learn drafting techniques, computer modeling, lighting, and materials and methods, with an emphasis on sustainability, user health, and safety.

FIT is a leader in career education in art, design, business, and technology, with a wide range of programs that are affordable and relevant to today's rapidly changing industries. Part of the State University of New York, the college offers more than 45 majors leading to the AAS, BFA, BS, MA, MFA, and MPS degrees.