The Museum at FIT (MFIT) presents highlights from the exhibition Design in Motion: A New York City Ballet Fall Fashion Gala Retrospective, which provides an up-close look at the incredible artistry of the New York City Ballet (NYCB) Costume Shop, and showcases costumes from NYCB’s Fall Fashion Galas, which were designed by some of the fashion world’s most visionary designers.

The Runaway
Choreography by Kyle Abraham
Costume design by Giles Deacon
Originally presented in the Fall of 2019, in partnership with INTERSECT BY LEXUS-NYC at their location in the Meatpacking District, and curated by NYCB Director of Costumes Marc Happel, this is the first-ever collaboration between NYCB and MFIT, New York City’s only museum solely devoted to fashion.  Design in Motion uniquely complements the museums current exhibition, Ballerina: Fashion’s Modern Muse. This is the first large-scale exhibition to illustrate the profound and enduring influences of classical ballet and its most celebrated practitioners — ballerinas — on modern high fashion, which is on view through April 18.
This exhibition of highlights from Design in Motion will feature nearly 30 original costumes, designed by 25 of the world’s leading fashion designers and spans eight years of NYCB’s Fall Fashion Gala from 2012-2019.  Designer sketches and performance videos, commissioned by INTERSECT BY LEXUS – NYC, will also be on view. 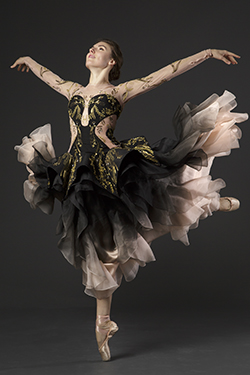 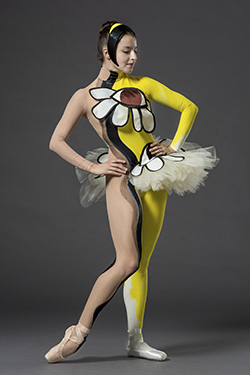 Pulcinella Variations
Choreography by Justin Peck
Costume design by Tsumori Chisato
Held each September, the NYCB annual Fall Fashion Gala was conceived by NYCB’s Board Vice Chair Sarah Jessica Parker in 2012 with a gala celebration of the legendary designer Valentino. Since then, top fashion designers and acclaimed choreographers from across the globe have collaborated with Happel on the costume designs for 29 ballets.
Ballerina: Fashion’s Modern Muse includes a series of public programs including a daylong symposium, to be held on March 6, which will explore the ways in which twentieth-century ballerinas and their glamorous, romantic costumes profoundly inspired modern fashion, and features dance historians and experts such as Happel, Laura Jacobs, Joel Lobenthal, Jane Pritchard, and Lynn Garafola.
The designers whose costumes will be displayed as part of the Design in Motion exhibition include:

“I am excited to have this additional opportunity to share what has been created over the last eight years of the Fall Fashion Gala,” says Marc Happel, NYCB’s Director of Costumes. “It’s an incredible list of designers who we’ve collaborated with, and to see all these designs together in the MFIT lobby space will be a remarkable experience. I am most honored to showcase the unbelievable artistry and versatility of the New York City Ballet Costume Shop, and the couture designs we’ve brought to life over the years.”
“We’re thrilled to partner with New York City Ballet” notes Patricia Mears, MFIT’s deputy director and curator of Ballerina: Fashion’s Modern Muse. “Original creations by Marc Happel and his predecessor Barbara Karinska are prominently featured in Ballerina. Having a stand-alone exhibition that showcases the work of today’s fashion designers and their unique collaboration with Marc and his superb team of artisans at NYCB is an enriching experience for all our visitors. It also fulfills our mission to advance knowledge of fashion.”

New York City Ballet is one of the foremost dance companies in the world, with a roster of more than 90 dancers and an unparalleled repertory of modern masterpieces. NYCB was founded in 1948 by the legendary choreographer George Balanchine and arts patron Lincoln Kirstein, and quickly became world renowned for its contemporary style and a repertory of original ballets that has forever changed the face of classical dance. In 1949 Jerome Robbins joined the Company as Associate Director and together with Balanchine created a vast and varied repertory that grew each season. From 1983 until his retirement in 2017, Peter Martins was the Company’s Ballet Master in Chief. In 2009 Katherine Brown was named NYCB’s first-ever Executive Director, a position created to oversee the administrative management of the Company and its long-time home, the David H. Koch Theater at Lincoln Center. In February 2019, NYCB named Jonathan Stafford Artistic Director and Wendy Whelan Associate Artistic Director.