Home /  The Museum at FIT /  Exhibitions /  Beyond Rebellion: Fashioning the Biker Jacket
In this section

Beyond Rebellion: Fashioning the Biker Jacket

Beyond Rebellion: Fashioning the Biker Jacket, organized by graduate students in the Fashion and Textile Studies program at The Fashion Institute of Technology, explored the genesis of the biker jacket and its evolution into a high-fashion garment. The exhibition traced the rise of the black leather jacket from utilitarian outerwear to iconic symbol of rebellion, function, and “cool.” Clothing from leading labels such as Jean Paul Gaultier, Yves Saint Laurent, and Rick Owens were featured.

The biker jacket emerged in the early twentieth century as a protective garment to shield motorcycle riders from the elements. Over the years, the mystique of the motorcycle jacket has attracted not only bikers, but also movie stars, young adults, and fashion designers. 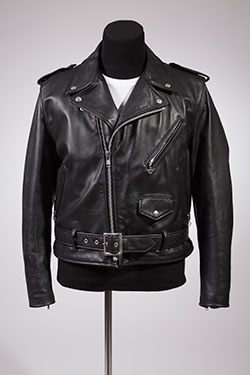 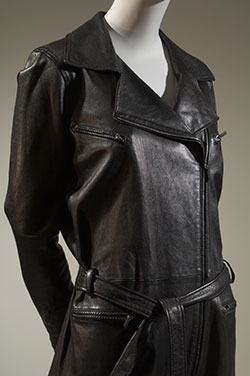 Yves Saint Laurent (Stefano Pilati), jumpsuit, black leather, fall 2009, France. Gift of Yves Saint Lauren, 2010.90.1.
The exhibition opened with a Perfecto jacket by the American outerwear company, Schott. The Perfecto style, introduced by Irving Schott in 1928, featured durable black leather horsehide, exposed zippers, metal snaps, and an asymmetrical front closure. By the 1950s, due in part to its appropriation by motorcycle gangs—associations fostered by movies such as The Wild One— the jacket had become an emblem of the outlaw biker. Other objects in this introductory section showed how the Perfecto’s iconic classic design and early history influenced fashion designers, exemplified by a 2009 Yves Saint Laurent jumpsuit that integrated characteristic design elements of the biker jacket, such as an asymmetrical front and exposed zippers. 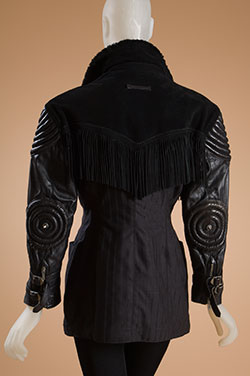 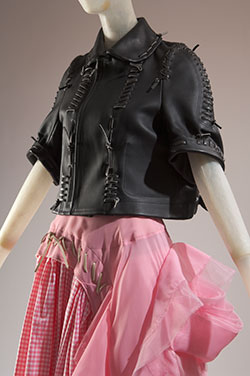 Comme des Garçons (Rei Kawakubo), jacket and skirt, black leather, pink gingham and tulle, spring 2005, Japan. Museum purchase, 2005.49.1.
The exhibition’s second section included work by fashion designers inspired by the countercultural groups that adopted the biker jacket as an expression of social defiance. Punks and leathermen utilized design details such as metal embellishments and construction that exposed or exaggerated the body as a marker to stand out from the rest of society. Included was a high-end jacket by Jean Paul Gaultier with a metal spike on each elbow and stitching details on the shoulders that recall armor and exaggerate the size of the upper body.

The final section explored avant-garde reinterpretations of the classic biker jacket pushing the boundaries of its original symbolism and design. A 2005 Comme des Garcons ensemble from the Biker + Ballerina collection juxtaposed a sculptural masculine black leather jacket with a girlish pink gingham and tulle skirt. While the “Biker Ballerina” ensemble and the Perfecto jacket of the 1950s serve very different functions and appeal to different consumers, the allure and mystique of the jacket remains.
©