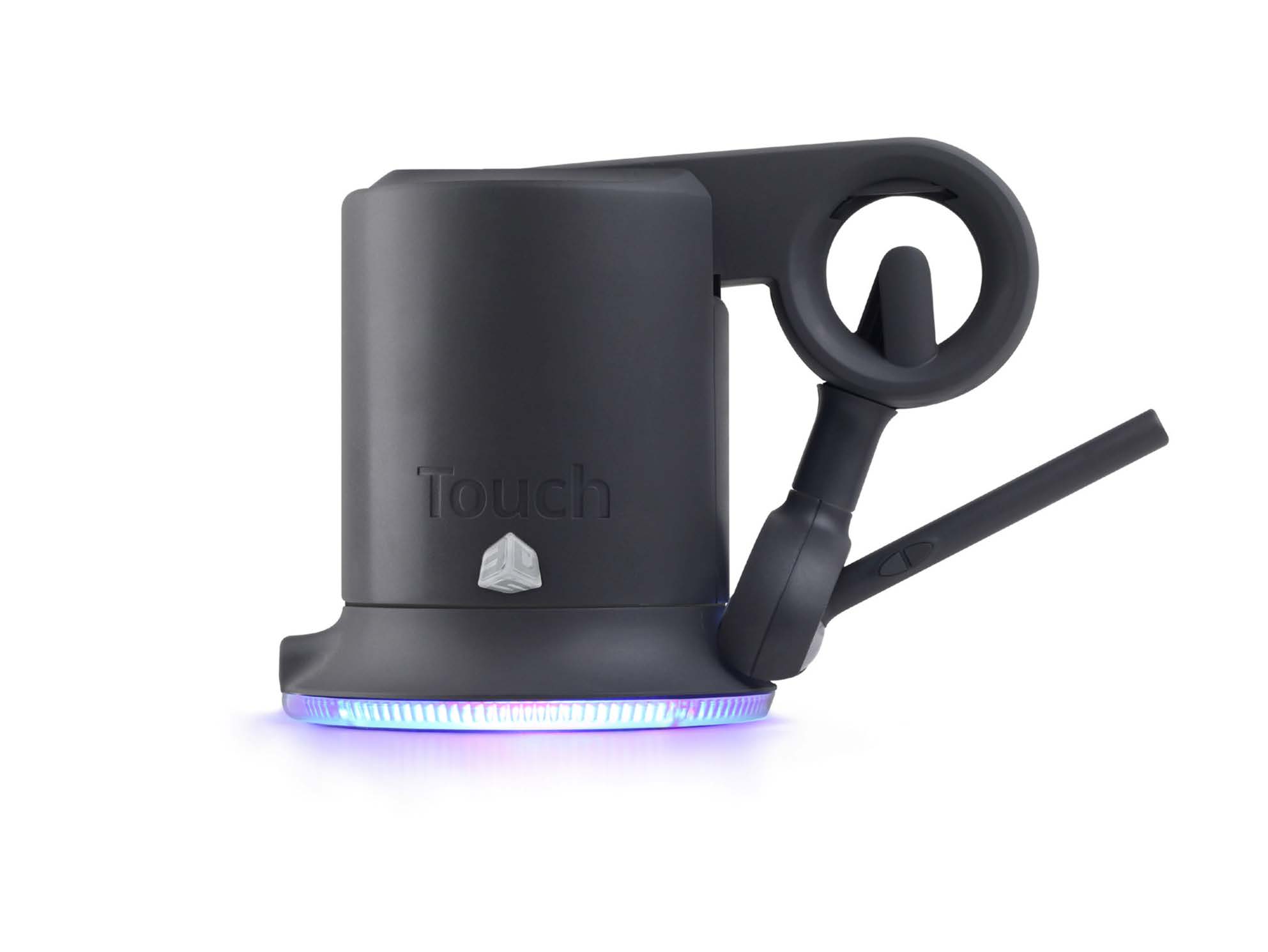 WARNING: INDICATES SOMETHING MAY HAPPEN THAT COULD CAUSE LOSS OF DATA,
DAMAGE TO EQUIPMENT, OR COULD CAUSE PERSONAL INJURY.

• Follow all safety rules in this section and observe all cautions and warnings in this guide.
• Hardware usage guidelines are provided to assist you in protecting the effectiveness and life of
the device. They are not intended as recommendations for the prevention of repetitive stress
injury, carpal tunnel syndrome or any other conditions, injuries or disorders; users should
consult their own physicians. By using the Touch device, you acknowledge and agree that 3D
Systems shall have no liability for any disorder, condition or injury arising from any use of the
device.
• Do not open the Touch device. Attempting to open or repair the device by anyone other than a
certified authorized service center voids the manufacturer warranty and hardware maintenance
contract. There are no serviceable components in the Touch device or power supply. Return to
3D for servicing.

GETTING TO KNOW THE TOUCH
TOUCH COMPONENTS 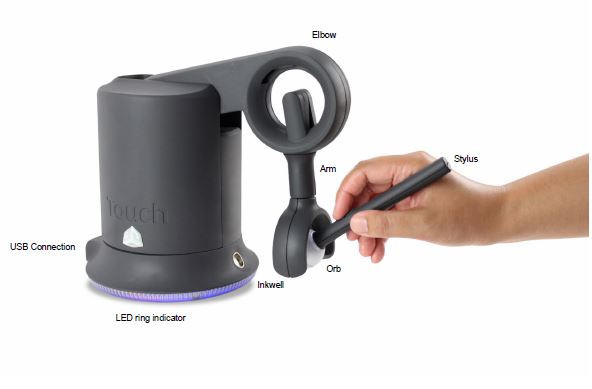 The picture below labels the parts of the Touch device.

WARNING: LIFTING THE TOUCH DEVICE IMPROPERLY MAY DAMAGE IT. TO
REDUCE THE RISK OF DAMAGE, PLEASE FOLLOW THE INSTRUCTIONS BELOW.

To properly lift the device grasp the base of the Touch unit on both sides and lift
as shown in the image below. DO NOT lift by grabbing the stylus or arm. Lifting the unit by the stylus
or arm could result in severe damage to the device. 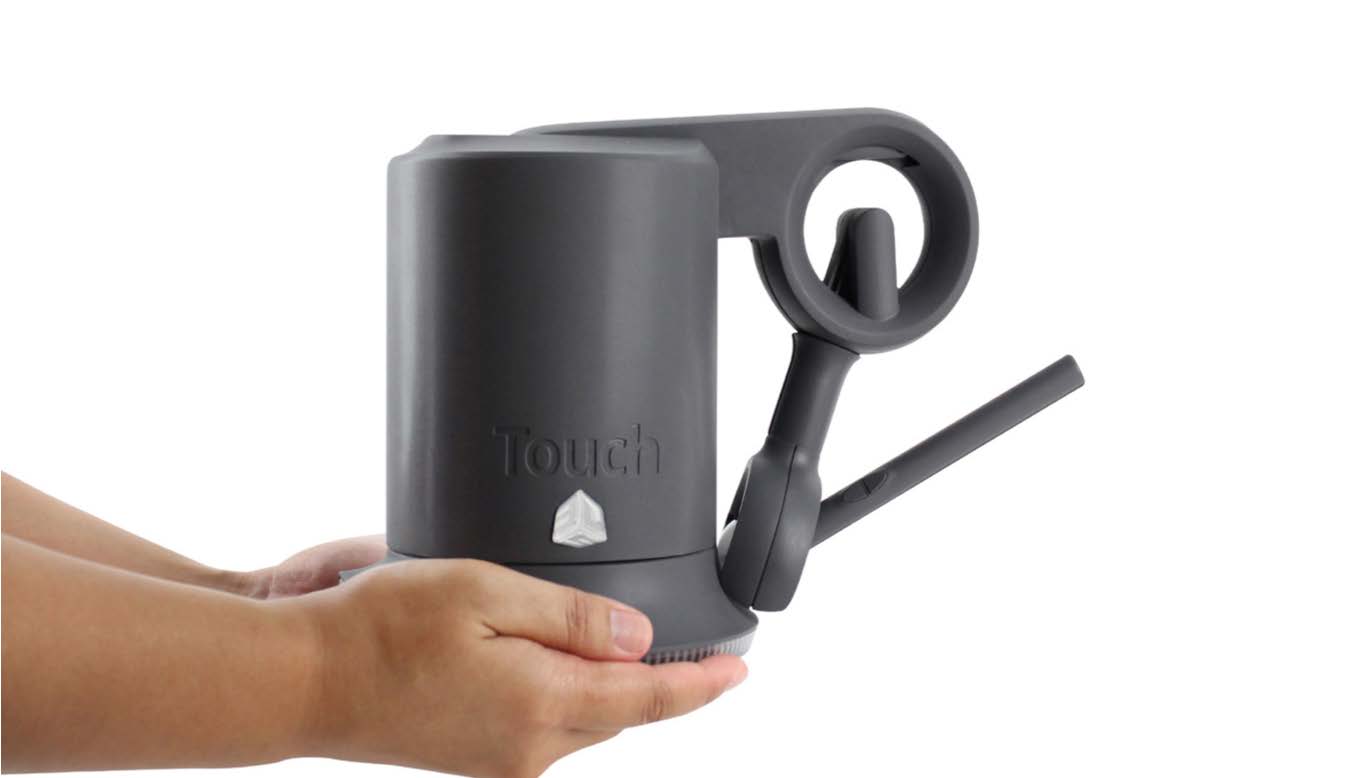 Protecting the device from damage:

It is best to place the device firmly on the desktop and away
from edges to reduce the risk of damage from a direct, unintentional elbow hit. 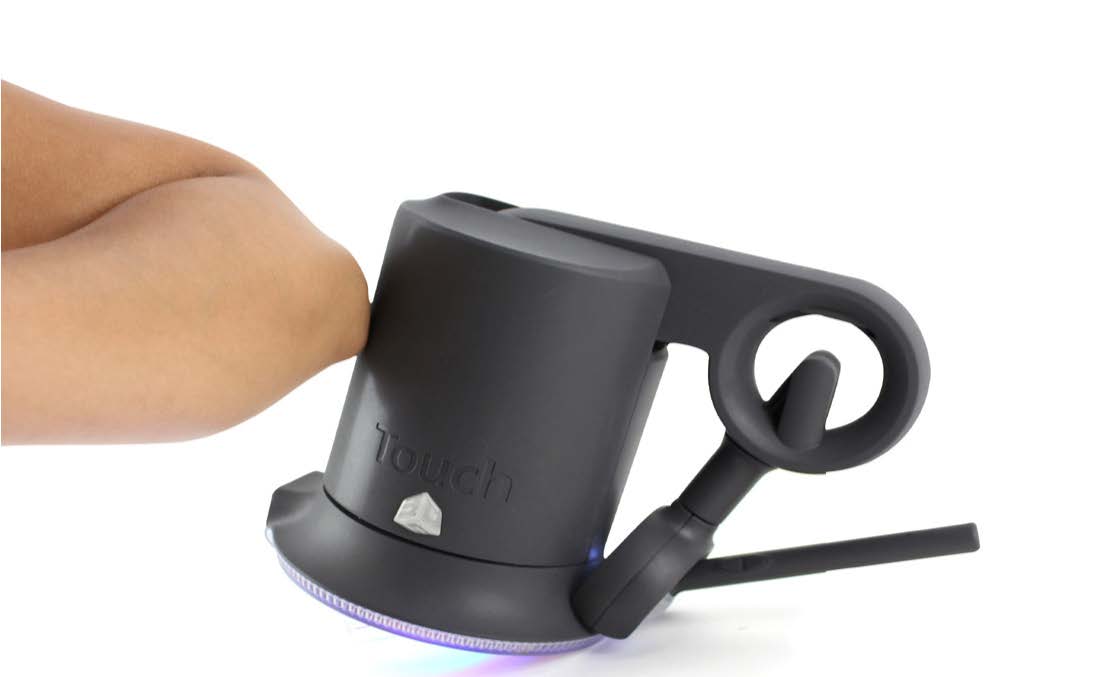 To reduce the risk of damage, keep the device out of the way. Pay extra attention if the
stylus is stored in the inkwell.

HANDLING THE STYLUS
The correct way to hold the stylus:

Grasp the stylus as you would a pen or pencil. Holding the stylus at the bottom, closer to the orb.

Lifting the stylus out of the inkwell: Grasp the stylus and lift up to disengage as shown below in
the image on the left. Do NOT attempt to pull the stylus straight out as shown on the right.

The Touch may need to be recalibrated from time to time, particularly if it
has lost power or has been moved. To calibrate the device, place the stylus in the inkwell and start
your application. The LED ring at the base of the Touch device will be lit White when the device is
properly calibrated.

The stylus does not need to be stored in the inkwell.

The correct placement of the device will vary from one user to another. You may want to experiment
to find a placement that feels right for you.
• The device should be positioned so that you are comfortable when working with it.
• You should not feel any strain on your wrist or forearm when working with the device.
• If you are left-handed, you may find it easier to work with the Touch placed to the left of the
keyboard.
• Remember to take breaks often to stretch your hands, wrists, and elbows.

This section introduces you to working with the Touch device and the physical limits of the device’s
range of motion. It is important to understand these physical limitations so that you do not
inadvertently damage the device by forcing it past its designed limits.

We have become so accustomed to using a mouse to move around a computer screen that we don’t
think twice as we move our hand around a desk to move the cursor. But there was a time not long
ago when this simple task was not second nature; some even found it challenging and were often
frustrated as they learned. If you are new to working with a haptic and in a 3D digital space, it may
take some time to feel comfortable. Understanding where objects are in 3D space may take some
practice before you are able to move and manipulate objects with ease and certainty. Be patient with
yourself.

PHYSICAL LIMITS OF THE DEVICE

The Touch device has physical limits. When you reach one of these limits you will feel a sudden stop;
this is the mechanical stop designed into the device. Forcing the Touch past any of these stops will
damage the device.
Take some time to become more familiar with the stops of the Touch before using the device by
moving the device through its full range of motion.

MOVING WITH THE STYLUS

Using the steps below and the accompanying images, try moving the stylus through the different range of motions.
1. Hold the stylus as you would a pencil or pen, with the free end (the end not connected to the device) of the stylus (the eraser end of a pencil) pointing towards you. 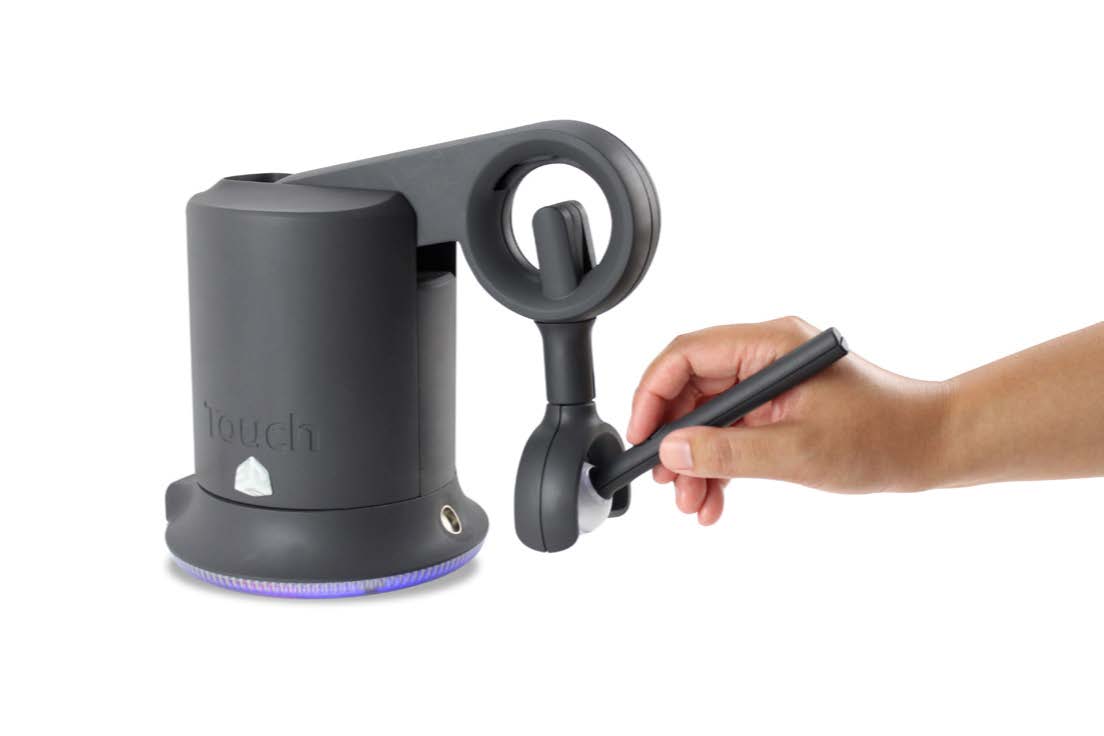 2. Gently move the stylus to the left and then to the right.

3. Move the stylus up and down.

4. Move the stylus towards the device and then away from the device.

NOTE: When you reach a physical limit, you’ll feel one of the device’s mechanical stops.
Don’t force the device past any of these stops.

5. Next, perform smaller movements from the orb, moving your wrist:

a. Rotate the stylus left and right.

b. Next pivot the stylus up and down.

c. Finally gently twist the stylus back and forth.

Now you should have an understanding of the range of motion of the Touch device and where its
limits are.

WARNING: ALWAYS WORK WITH THE CONNECTED END OF THE STYLUS POINTING
AWAY FROM YOU. NEVER ROTATE THE STYLUS WITH THE POINT FACING YOU