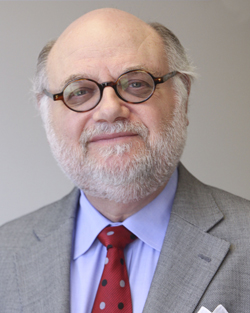 Steven Frumkin is the dean of the Jay and Patty Baker School of Business and Technology. Responsibilities include the leadership of ten associate and baccalaureate degree programs; fostering the development of a wide range of curricular offerings; maintaining and enhancing academic standards; representing the school on academic, professional, and industry committees; initiating and coordinating activities to secure resources and fundraising; overseeing the schools budgetary process; and coordinating and supervising the administrative actions of department chairs.

Previously, Frumkin was an associate professor at Philadelphia University, in the School of Design-Engineering-Commerce, School of Business Administration, where he served from 2000-2011. He graduated with a BS from the Philadelphia College of Textiles and Science in 1970 and earned an MBA from the Bernard M. Baruch College (CUNY) in 1977.

Frumkin spent more than 30 years in the textile, apparel, and retail industry and has been responsible for fabric design; new product development; fiber innovations; sales management, marketing, and merchandising; domestic and international financing, sourcing and U.S. customs regulations; retail product sourcing, placement, and design; and related industry strategic development. He has written and lectured on the subject extensively. Frumkin has served on the advisory boards of a number of textile, apparel, and related industry companies, and has delivered lectures and has consulted in India, China, Trinidad-Tobago, and Japan.

The recipient of a 2004 Fulbright Scholar Award, Frumkin has worked on projects for the U.S. State Department and United States Agency for International Development (WINROCK) in Uzbekistan and Kazakhstan. There he worked with emerging manufacturing companies in the global marketplace. In 2007, he was awarded a U.S. Presidential Volunteer Service Award for his work in Central Asia.

In 2003, Frumkin was appointed the associate director of the Laboratory for Engineered Human Protection, a federally-funded research initiative to develop protective clothing systems for military and civilian first responders.